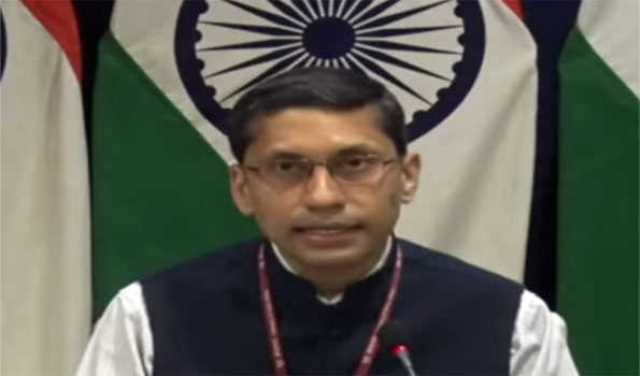 New Delhi/UNI: The Ministry of External Affairs on Friday termed Pakistan Foreign Minister Shah Mahmood Qureshi's comments as “absurd” that laid the blame on Indian and Afghan intelligence agencies for the July 14 Dasu blast in which nine Chinese workers were killed.

India said that such “desperate attempts by Pakistan at peddling lies and propaganda will find few takers”.

In a statement, the Ministry of External Affairs spokesperson Arindam Bagchi said that Qureshi’s comments are yet another attempt at maligning India in a bid to deflect global attention from “its role as the epicentre of regional instability and a safe haven for proscribed terrorists”.

“We have seen reports on the absurd comments made by the Foreign Minister of Pakistan on the incident in Dasu. This is yet another attempt by Pakistan to malign India, in a bid to deflect international attention from its role as the epicenter of regional instability and a safe haven for proscribed terrorists," he said.

“India has been at the forefront of global efforts against terrorism in partnership with the international community, which is well aware of Pakistan’s credentials when it comes to terrorism. Such desperate attempts by Pakistan at peddling lies and propaganda will therefore find few takers,” the MEA statement read.

Qureshi, speaking at a news conference in Islamabad on Thursday, said the vehicle used in the attack had been smuggled into Pakistan from Afghanistan.

“According to our investigation, Afghanistan’s soil was used for this attack, for its planning, its execution and the making of the plans, we see them clearly connected to an NDS and RAW nexus,” he said, referring to the National Directorate of Security (NDS), the Afghan intelligence agency, and India’s Research and Analysis Wing (RAW) .

The blast in Dasu, in northern Pakistan's Khyber-Pakhtunkhwa, on July 14 took place on a bus carrying Chinese and Pakistani workers to the site of a hydroelectric dam being built by China as part of the China-Pakistan Economic Corridor (CPEC) project.

Nine Chinese workers were among the 13 people killed.

Work on the project has been suspended since the blast, and Islamabad has been at great pains to reassure Beijing of the safety and security of its projects in Pakistan.