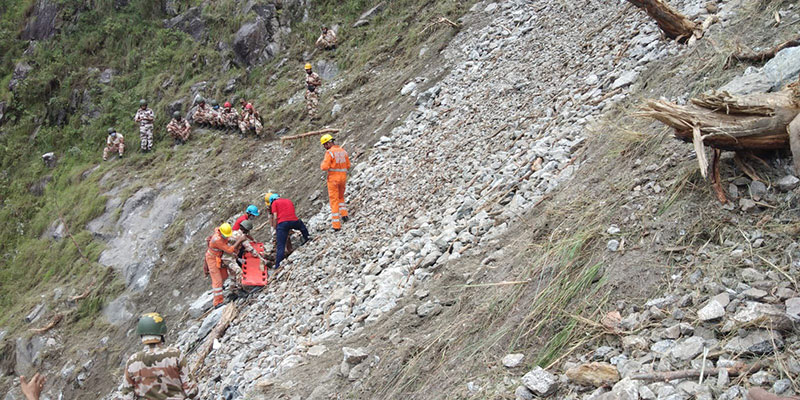 A HRTC bus missing in landslides and going down the road under the impact of heavy boulders was found by the rescue team including a body of a deceased passenger.

On Wednesday, an incident of shooting stones was reported at Nigulsari Tehsil Nichar district in which several passengers lost their lives and many sustained injuries,

Due to the landslide and Shooting Stones one HRTC Bus (Route: Reckong-Peo to Haridwar), two cars, one passenger vehicle (Tata Sumo) and one truck were buried under the debris.

According to SHO-Bhawanager, around 25 to 30 more passengers may have been affected so far 26 victims including 13 deceased and each injured have been evacuated in this massive search operation which involved about 300 rescue people including NDRF, ITBP, State Police and Home guard jawans.

Thirteen dead bodies have been recovered from the incident site, more likely to be recovered today as many passengers of HRTC bus and Bolero Camper were missing in the debris.

Hindustan Tibet National Highway 5 has been blocked due to the mishap since 1200 hrs yesterday and through open for vehicular activities but traffic movement is not restored yet.

Rescue team also confirmed recovery of five ill-fated vehicles and most of the passengers belonged to them; however a HRTC bus was traced in the heavy boulder this morning along with a body inside. A Bolero and its passengers are not found under the debris and are still untraceable. It might be possible that the vehicle has been rolled down with the debris.

One passenger vehicle (Tata Sumo) has been recovered in which 8 persons were found dead and their bodies were sent for Post mortem at CHC-Bhawanagar.