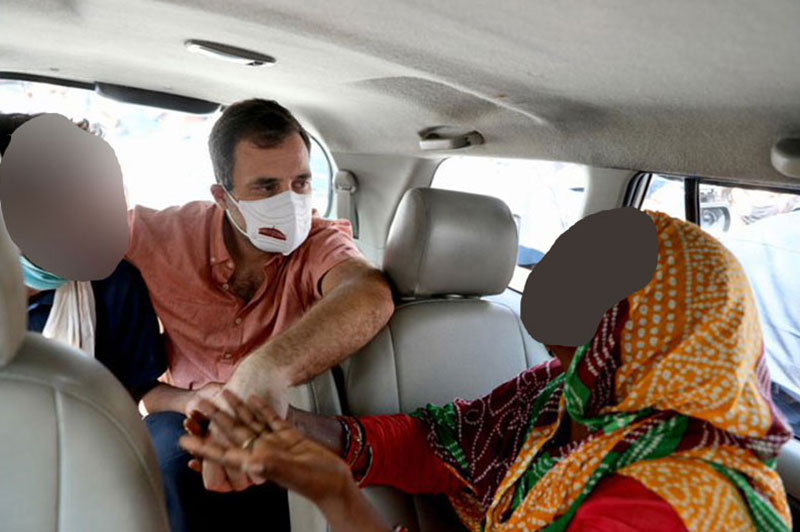 New Delhi/IBNS: The National Commission for Protection of Children's Rights (NCPCR) has issued a notice to Twitter India, asking it to delete an image posted by Congress MP Rahul Gandhi that reveals the identity of the Dalit girl whose alleged rape, murder and forced cremation in Delhi has triggered massive protests.

The image was posted by Gandhi on Wednesday morning, after he met the young girl's family at their residence in Delhi Cantonment's Old Nangal village.

Gandhi tweeted the image of the parents with this caption in Hindi: "Her parents' tears are saying only one thing - their daughter, the daughter of this country, deserves justice. And I am with them on this path of justice."

The image clearly shows the faces of the girl's parents seated along with the Congress leader inside a vehicle as they have a conversation.

"Revealing the identity of the girl by tweeting a photo of her parents (is) in violation of the POCSO (Protection of Children from Sexual Offences) Act... The NCPCR, taking cognizance of this, has asked Twitter India to issue a notice to Rahul Gandhi and remove the post," the NCPCR tweeted.

In its notice, addressed to Twitter India's Resident Grievance Officer, the child rights body said it was acting based on a complaint that the photo "reveals the identities of the girl" by showing her parents.

The NCPCR reminded Twitter India that under the Juvenile Justice Act and the POCSO Act it is illegal to disclose the identity of a minor via any form of media, or publish any information or photograph that may, in any way, reveal his/her identity.

The former Congress chief on Tuesday called the girl "the nation's daughter" - a pointed reference to accolades for India's women Olympians, who are given the title after their medal-winning exploits.

Kejriwal expressed sorrow over a "loss that can't be compensated" and promised support from the Delhi government in ensuring those guilty of the crime receive the maximum possible punishment.

The Chief Minister also announced Rs. 10 lakh in ex-gratia for the family.

On Sunday, the nine-year-old girl, belonging from a poor family, went to a crematorium near her home to fetch drinking water from a cooler but she never returned.

Around 6 pm, locals who knew the cremation ground priest, Radheshyam, called her mother to the crematorium and showed her the body of her daughter. They claimed she had been electrocuted.

The priest and his companions told the mother not to inform the police. "Go home and sleep. Don't shout and cry about it," the girl's mother quotes the priest as saying while the body was forcefully cremated.

The priest of the crematorium where the girl's body was found and three others have been arrested, and face charges that include child sex abuse and crimes against scheduled castes and tribes.