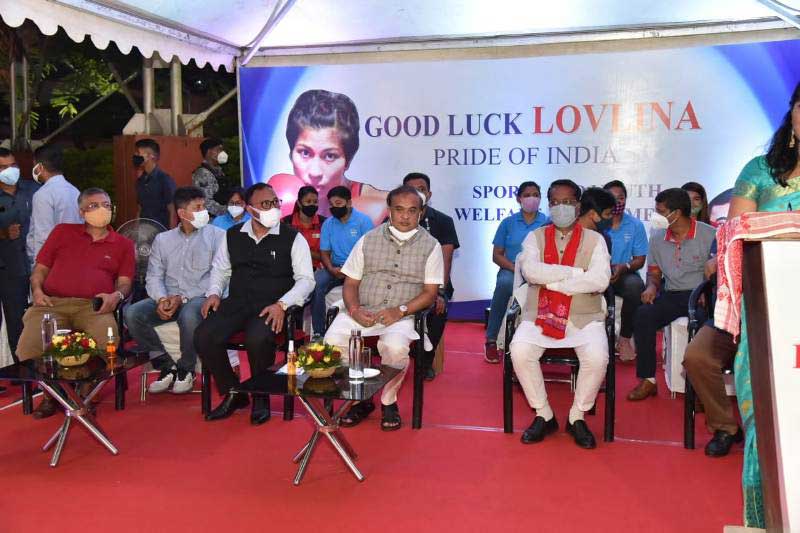 Guwahati/IBNS: Lovlina Borgohain the ace boxer who has become the first Assamese to secure a medal in the history of 125 years of Olympic Games, would bout in the semi final on Wednesday to secure her berth for the historic Olympic final.

In an attempt to pray for the boxer, a programme was organised in the Nehru Stadium to lit candles which was participated by Assam Chief Minister Himanta Biswa Sarma.

By lighting a candle in front of the statue of Radha Govinda Baruah, Chief Minister Sarma marked the auspicious inauguration of the programme.

Later talking to the media, Chief Minister Sarma said that fo wish Lovlina Borgohain for the semi final to be played on Wednesday at 11 am and to pray for her, the programme was organised. He also appealed to everybody to pray for Lovlina and lit a lamp in the morning for her.

To wish Lovlina on the eve of her much-awaited bout, I lit a ceremonial lamp before 'Singhapurush' Radha Govinda Baruah's statue at Nehru Stadium, Guwahati.

I earnestly appeal to all people of Assam to pray for her success and light lamps in their houses tomorrow morning.
2/2 pic.twitter.com/EPYTLqGjQW

On the other hand, the proceedings in the Assam Legislative Assembly would be adjourned for 30 minutes on Wednesday during the semi-final match of Assam pugilist Lovlina Borgohain in Tokyo Olympics.

The functioning of the Assam assembly would likely adjourn for half an hour on Wednesday from 11 am to 11-30 am.