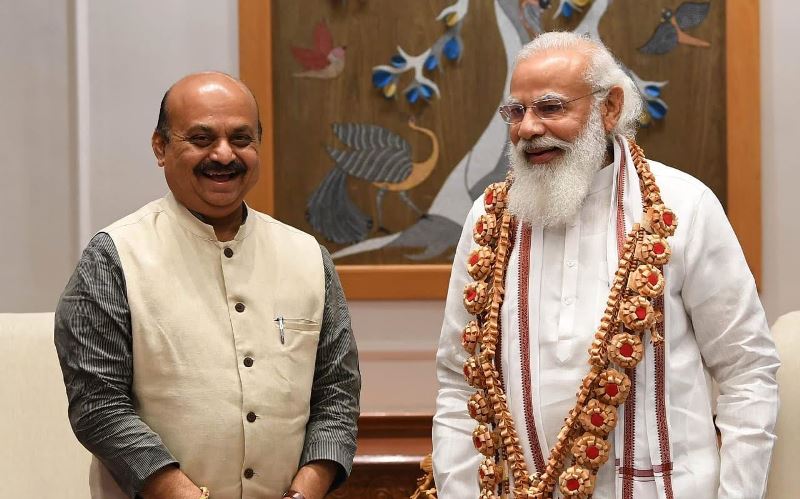 Bengaluru/UNI: The BJP central leadership, in discussion with state leaders including Chief Minister Basavaraj Bommai and Union Minister Prahlad Joshi, have worked out a formula of announcing the list of ministers phase wise to avoid possible revolt of senior party legislators who could be dropped from the yet-to-be formed ministry.

The central leadership is expected to reveal the ministers' list by Tuesday evening.

"There is a parliamentary session. After the session, they (party's central leadership) will discuss and reveal the list (of names of the ministers) on Tuesday," Bommai told the reporters late Monday night.

The swearing-in ceremony is likely to take place tomorrow with the possibility of a green signal from the central leadership.

Party sources say that the central leadership is expected to drop some of the legislators, who were in BS Yediyurappa's cabinet, to make way for young legislators.

Some other senior legislators, who were in Yediyurappa's cabinet, would be retained, considering caste and regional factors.

The central leadership is also expected to induct some legislators who migrated to the BJP from Congress and JD(S) to topple the previous JDS-Congress government to form the Yediyurappa-led government in the state. Bommai himself had asked "outsiders" not to worry as they are part of the party.

Bommai prepared three lists of various combinations and had given them to the central leadership. However, they discussed only one list of names.

"Generally speaking, three lists of various combinations have been submitted. Our national party president will finalise one list. What they will do, I do not know. They will hold another round of discussion and finalise. After that, they will decide on the number of ministers to be inducted. This is because they are taking into consideration regional and social factors, which takes time," he said.