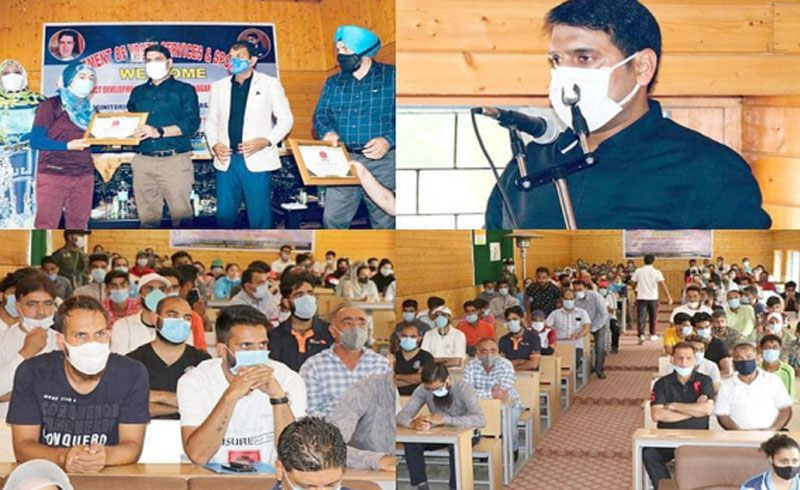 Srinagar: In a move to boost the morale of budding sports talent in Shaher-e-Khaas, the District Administration Srinagar conducted first ever DownTown Sports Conclave at MPML Higher Secondary School here.

The District Development Commissioner(DDC) Srinagar, Mohammad Aijaz Asad was the Chief Guest on the occasion. The conclave was attended by players of different Teams/Clubs/Academies/young achievers and Veteran Sports personalities from Shahr-e-Khaas.

The DDC assured sports enthusiasts that every possible support in terms of equipment, infrastructure upgradation and general handholding will be provided by the administration to showcase their talent.Asad congratulated the sports talent of the downtown who have excelled at J&K level and National level and extended his best wishes to them to achieve new heights of success at International level sports competitions and bring laurels to the country.

He further encouraged the sports person to work hard and bring laurels to Shahr-e-Khaas. Later, the DDC distributed Sports equipment’s and Kits among the Sports Clubs of Shahr-e-Khaas.

He also felicitated Veterans and young achievers with Awards of Honour. Earlier, the District Youth Services & Sports Officer Srinagar, Balbir Singh, briefed the gathering regarding the programmes and schemes of the department.

He further stated that so far DYSSO Srinagar has registered more than 400 sports clubs in Football, Cricket, Kabaddi, Kho-Kho, Volleyball, Badminton, and Chess & Carom during the current session and the process is going on. Among others, the Principal MPML Higher Secondary School, Romana Qazi, Former National Referee and former Joint Secretary Sports Council, Nazir Ahmad, all Zonal Physical Education Officers of District Srinagar.