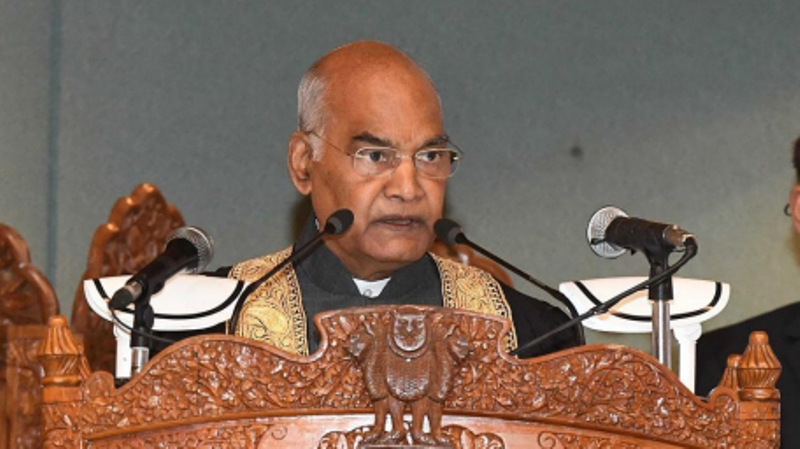 Srinagar/IBNS: President Ram Nath Kovind on Tuesday said that climate change is the most critical challenge before humanity, adding that global warming is making its impact everywhere.

Addressing the 19th convocation of the Kashmir University, he hoped that the centres for glaciology and Himalayan biodiversity at the varsity will show the way to the world in fighting climate change.

"Climate change, as you are aware, is the most critical challenge before humanity in this century. Global warming is making its impact everywhere, but nowhere is it more felt than in the fragile ecosystem of the Himalayas," the President said.

He said the University of Kashmir has added another feather to its cap with the setting up of two centres that are of high importance.

"One is devoted to glaciology and the other to Himalayan biodiversity documentation, bioprospecting and conservation. There is also the National Himalayan Ice-Core Laboratory. I am confident that these two 'Centres of Excellence' and the laboratory will help Kashmir and also show the way to the world in combating climate challenges and nurturing nature," Kovind added.

The president's stress on climate change came in the wake of recent natural disasters in Himalayan states, including Himachal Pradesh and Uttarakhand.

While nine persons were killed in landslides in Himachal Pradesh on Sunday, more than 70 persons died in the glacier burst in Uttarakhand in February.

Referring to the COVID-19 pandemic, the president said he was glad to know that the university had responded to the pandemic in a most praiseworthy manner.

"The entire world has been facing a difficult time. The coronavirus has impacted all walks of life and education is no exception. Fortunately, technology provided a solution. Schools, colleges and universities across India have continued to provide education in the online mode," Kovind added.

After the outbreak last year, the University of Kashmir shifted to online modules and made e-resources available to its students, the President noted.

Moreover, it also supported the administration by providing quarantine at its main, north and south campuses. It shows how universities' contribution to society can go far beyond imparting education, he said.