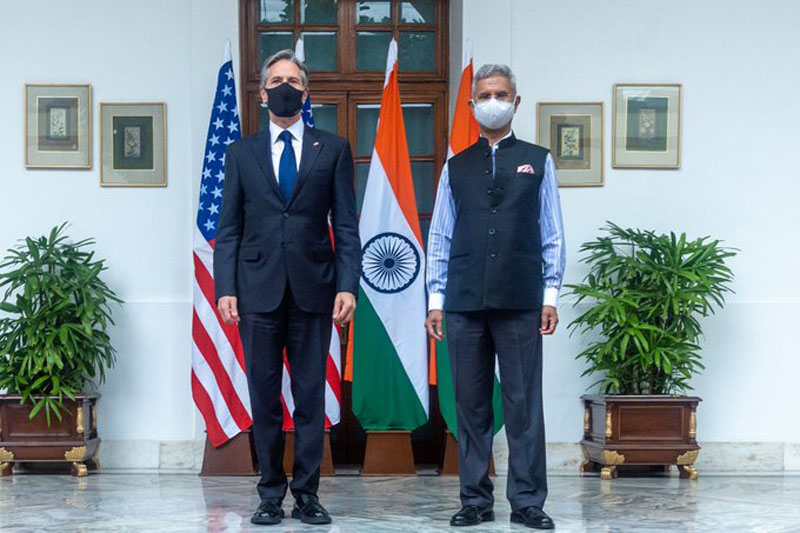 New Delhi/UNI: India said on Wednesday it is imperative that the peace negotiations on Afghanistan are taken seriously by all parties, and that the independence and sovereignty of the war-torn country can only be ensured if it is free from “malign influences”.

Addressing a joint presser with visiting US Secretary of State Antony Blinken, External Affairs Minister S Jaishankar said the talks between the two sides had focused on regional issues, especially on Afghanistan where the US troops are pulling out.

“Regarding Afghanistan, it is essential that the peace negotiations are taken seriously by all parties. The world wishes to see an independent, democratic, sovereign and stable Afghanistan, at peace with itself and with its neighbours.

“But its independence and sovereignty will only be ensured if it is free from malign influences,” the EAM said, in an oblique reference to Pakistan and its harbouring of militants on the Afghan border.

“Similarly unilateral imposition of will by any party will obviously not be democratic and can never lead to stability. Nor indeed can such efforts ever acquire legitimacy. The gains to Afghan civil society, especially the rights of women, minorities and all social freedoms over the last two decades are self -evident. We must collectively work to preserve them,” he said.

Blinken said that the rapid advances of the Taliban and the atrocities perpetrated by them are “deeply troubling and do not speak for their intentions for the country”.

He said an Afghanistan that does not respect the rights of people, and commits atrocities will become a pariah state.

“The Taliban seeks international recognition and wants its leaders to travel freely and the sanctions lifted. But taking away the rights of people is not the path to achieving those objectives. It is only at the negotiating table,” Blinken said.

He also said, "There can be no military solution to the conflict in Afghanistan". The Afghan resolution requires that the Afghan government and the Taliban come to the negotiating table. Any future government has to be inclusive of the Afghan people and be Afghan-led and Afghan owned-process.

“And it is accurate to say that there is largely agreement between both countries on that future," the US top official said.