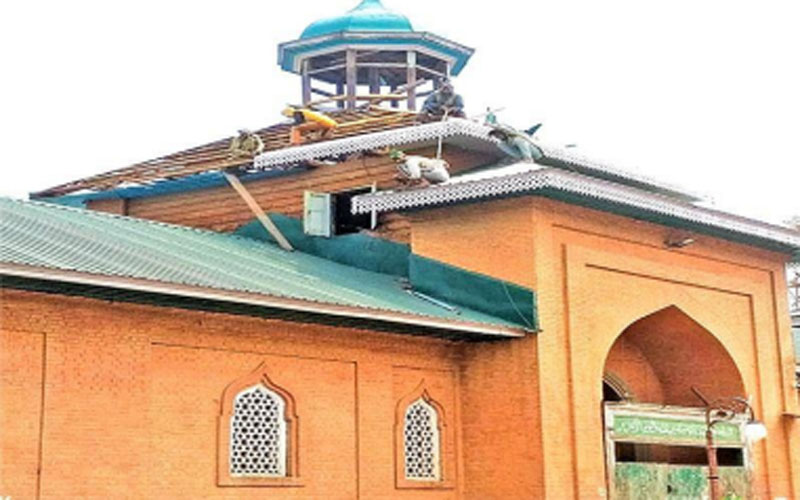 Renovation of Jamia Masjid in Shopian in Kashmir under full swing

Srinagar/IBNS: The renovation and preservation work on Jamia Masjid in Shopian is going on in full swing. It had started a few months ago under the supervision of the district administration.

According to an official, the turrets, rooftop and interior architecture of the masjid is being renovated.

Sprawling over 9 kanal land, the Masjid is second-largest in Kashmir after Jamia Masjid, Srinagar that had its foundation stone laid in 1940 while taking 13 years to complete the structure.

"The Masjid was built out of the local donations only," said historian Muhammad YousufTaing. He said that even women donated their golden ornaments for the construction of the Masjid. "The camels were pressed into service to ferry boulders from the nearby Rambiara," Taing said.

He said that Moulana Abdullah Shah, a local cleric, was then the caretaker and Waiz of the Jamia Masjid.

"A local committee headed by an affluent businessman Ghulam Hassan Khan was constituted to raise the donations and supervise the construction work," Taing added.

The turrets of the masjid are made of Deodar wood; the windows are embellished with geometrical designs, while the dozens of wooden columns inside the masjid give it a magnificent look.

"Our main aim is to retain the original architecture while carrying out the renovation work," the official said.

He said that the electric work had recently been completed but the renovation work on turrets was going on.

Assistant Commissioner Revenue Shahbaz Ahmad Boda said that around Rs 75 lakh had been spent on the refurbishment process so far.

"The complete renovation work will cost more than Rs 1 crore," he said, adding that the entire amount being spent on the renovation process was from the masjid’s funds.

A few antique decorative lights and benches were also installed outside the Masjid as part of the government's beautification drive.