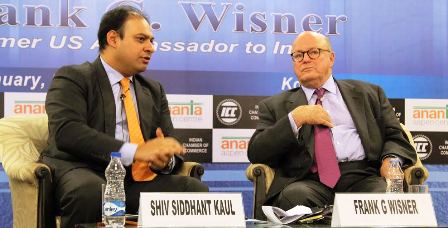 "Inviting Obama as the chief guest on the occasion of Republic Day, Prime Minister of India Narendra Modi has done a great job, this step will tighten Indo-US relationship," Frank G. Wisner said addressing a discussion session organized by Ananta Aspen Centre in association with the Indian Chamber of Commerce (ICC) at The Bengal Club. Frank G. Wisner said  terrorism is a very important issue in the world and countering terrorism is not just a strategical challenge, but an issue of security. He condemned  the recent terrorist attacks in Paris. "As an ex-serviceman, I'm very sorry to say that our President did not attend the protest march against terrorism in Paris," Wisner added. Frank also praised the 'Make in India' project of Narendra Modi. He said that US wanted a strong India and they were ready to co-operate with this fast developing country. While talking on terrorism, he said that to build a good relation with Pakistan on the issue of terrorism  was really very difficult for both India and US and the two countries were trying very hard to overcome this challenge.  "An international co-operation is needed to fight against terrorism," Wisner added. According to Wisner, India has a high class free trading area but there is a lack of promotion. "India needs to be promoted well," he said. "China is not our competitor and we are ready to start joint ventures with the developing Asian countries like China, Japan and India," Frank G. Wisner concluded. The senior vice president of ICC Shiv Siddhant Narayan Kaul was also present in the event. (Reporting by Deepayan Sinha, images by Sounak Choudhury)