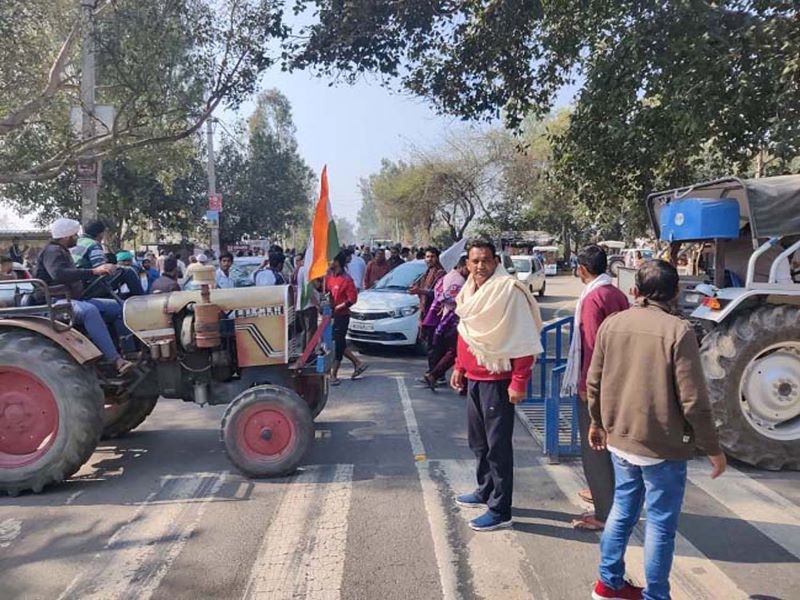 Farmers knock down barricades at protest against sedition laws in Haryana

Sirsa/IBNS: Farmers ran over barricades during a protest demonstration against the arrests and sedition case in connection with the alleged assault of Haryana Assembly's deputy speaker Ranbir Gangwa.

On Thursday, five farmers were arrested and charged with sedition for allegedly attacking the BJP leader on July 11.

Sirsa, a town nearly 250 km away from Delhi, has been on high alert as farmer leaders launched a vehement protest against the government's move and demanded immediate release of those arrested.

On Sunday, Gangwa was allegedly attacked and his official vehicle was vandalised by a group of farmers during a protest against the new farm laws.

In a statement, Samyukt Kisan Morcha, one of the farmers' unions protesting against the farm laws, slammed the charges, terming them "false, frivolous and cooked up" and vowed to challenge them in court.

"SKM strongly condemns false, frivolous and cooked-up sedition charges, and indeed all other charges, against farmers and farmer leaders under instructions of the anti-farmer BJP government of Haryana," it said.

The Supreme Court, recently, questioned the relevance of the sedition laws enacted during the colonial period after 75 years of independence.

"The sedition Law is a colonial law. Do we still need the law in our country after 75 years of Independence," Chief Justice NV Ramana questioned earlier this week.

"The dispute is it is a colonial law... the very same law was used by the British to silence Mahatma Gandhi and to suppress the freedom movement. Is the law still necessary in the statute book in our country after 75 years of Independence?" the court had said.