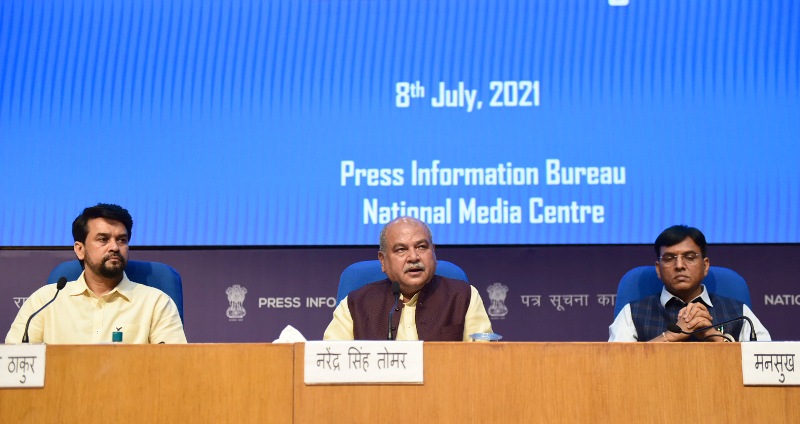 The announcement came a day after a major Cabinet revamp on Wednesday which also saw 43 new faces being inducted.

The government announced that the scheme aims to accelerate health system preparedness for immediate responsiveness for early prevention, detection and management, with the focus on health infrastructure development including for Paediatric Care and with measurable outcomes.

Of the old portfolio holders, Harsh Vardhan was sacked as the health minister following the second wave of Covid which engulfed the nation, exposing its inadequate health infrastructure.

In the reboot on Wednesday, Mansukh Mandaviya has been given the charge of the crucial health ministry.

Out of the 23,000 crore package, around ₹ 15,000 crore will be spent by the centre and ₹ 8,123 crore will be allocated to states, newly appointed health minister Mansukh Mandaviya said.

Under this package,  paediatric units will be set up in all 736 districts and also Paediatric Centre of Excellence (PaediatricCoE) in each State/UT, (either in Medical Colleges, State Govt. Hospitals or Central Hospitals such as AIIMS, INIs, etc) for providing Tele-ICU services, mentoring and technical hand-holding to the District Paediatric units.

The scheme will augment 20,000 ICU beds in public healthcare system out of which 20% will be Pediatric ICU beds.

It will provide care closer to the community due to the ingress of COVID-19 in rural, peri-urban and tribal areas, by creating pre-fabricated structures for adding additional beds at the existing CHCs, PHCs and SHCs (6-20 bedded units) and support would also be provided to establish bigger field hospitals (50-100 bedded units) depending on the needs at tier-II or Tier-III cities and district HQs.

The scheme will aid in installation of 1050 numbers of Liquid Medical Oxygen Storage Tanks with Medical Gas Pipeline System (MGPS), with an aim to support at least one such unit per district.

This comes after PM Narendra Modi's government faced severe criticisms after the second wave of COVID-19 hit India and cases jumped up to 4 lakh per day.

After Wednesday's Cabinet expansion and reshuffle, PM Modi now has 77 ministers, with nearly half of them new.

Earlier in the evening, PM Modi held a virtual meeting of the new cabinet that now includes 30 ministers while the council includes 77 in all.