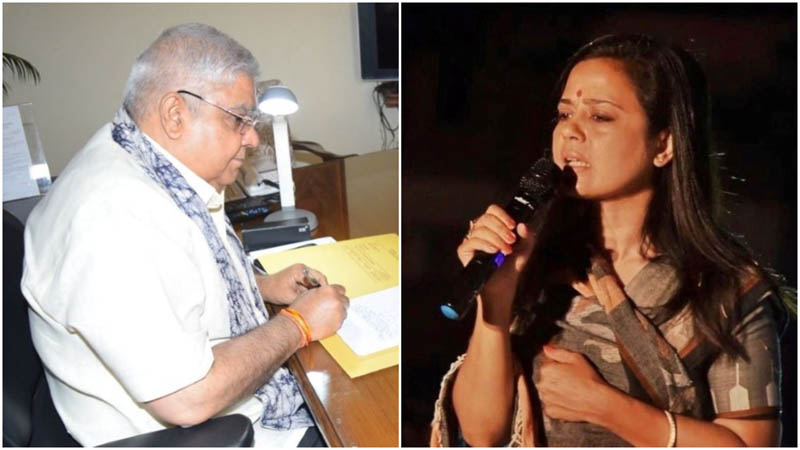 In a tweet, Moitra, a cut-throat Lok Sabha MP, said Dhankhar was a "beneficiary" of an "illegal" land which was later cancelled by the Punjab and Haryana High Court.

She has attached a couple of copies along with the tweet.

"'Man of integrity' Governor WB was beneficiary of illegal residential land allotment which later came to be cancelled by a Full Bench of Punjab & Haryana HC Was this also constitutional, Uncleji?" the Krishnanagar MP tweeted.

This comes hours after West Bengal witnessed an unprecedented showdown between Chief Minister Mamata Banerjee and Dhankhar, in an extension to the regular confrontation between the administrative and constitutional heads.

He is a "corrupt man", alleged Banerjee, stating that he was charged in the 1996 Jain hawala case in reference to a dairy that reportedly named politicians who had received kickbacks.

"This Governor's name was in the Jain Hawala case. But they have gone to court, cleared it from the court. There is a PIL. But the PIL is pending. What you want to know? He is a corrupt man, I am sorry to say. An all corruption-oriented man," Banerjee told reporters.

"Why does the Centre allow a Governor like this? Take out the charge-sheet and see if his name was there or not," she added.

Wonder how a leader of stature @MamataOfficial can level baseless and false allegations- perhaps too confident the sensation narrative would find takers in pliable media.

Allegations are categorically denied as baseless, FALSE and diversionary cover up tactics. pic.twitter.com/ymb216i9m9

In a counter press meet, Dhankhar said he was "shocked" at the Chief Minister's allegations.

"Your Governor has not been charge-sheeted. There is no such document. This is far from fact. This is plain and simple untruth. This is misinformation. I did not expect this from a seasoned politician," he told reporters at Raj Bhavan.