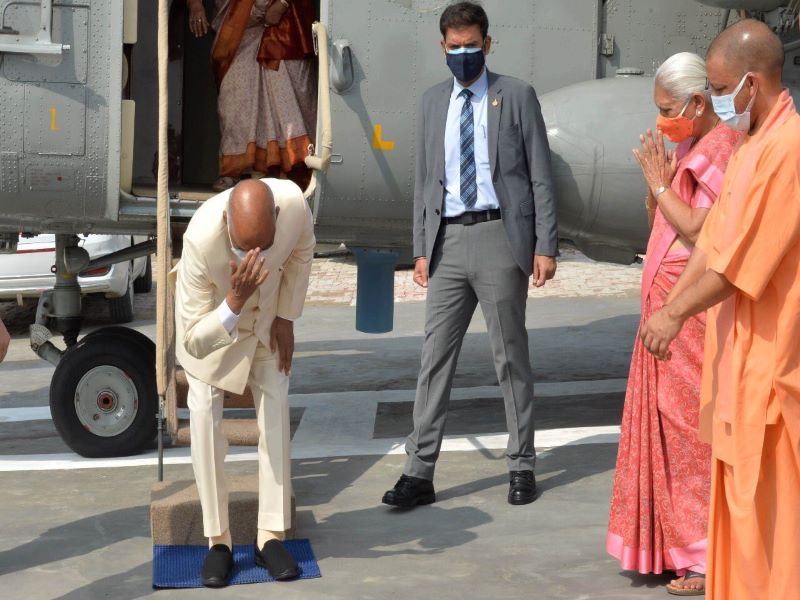 Kanpur/IBNS: President Ram Nath Kovind bowed and touched the soil of his village Paraunkh in Kanpur Dehat district of Uttar Pradesh as he visited his birthplace for the first time after assuming office.

Dressed in a cream colour bandhgala and black shoes, the President bowed and touched the land of the village and placed his fingers on his forehead as a mark of deep respect for his native place, after landing at a helipad as Chief Minister Yogi Adityanath and Governor Anandiben Patel waited to greet him.

The President's office tweeted the pictures.

In a rare emotional gesture, after landing at the helipad near his village, Paraunkh of Kanpur Dehat district of Uttar Pradesh, President Ram Nath Kovind bowed and touched the soil to pay obeisance to the land of his birth. pic.twitter.com/zx6OhUchSu

The President also addressed a Jan Abhinandan Samaroh at his village.

"Vaccination campaign is going on all over the country and also in Uttar Pradesh. Vaccination is also like a shield to protect against the corona epidemic. That is why I suggest that you all get yourself vaccinated, but also motivate others to get vaccinated," said the President at the Jan Abhinandan Samaroh.

Wherever I am, the smell of the soil of my village and the memories of the residents of my village are always present in my heart. For me, Paraunkh is not just a village, it is my motherland, from where I have always been inspired to go ahead and serve the country,"underscoring the contribution of his village in his journey.

"I had never imagined even in my dreams that an ordinary boy like me from the village would get the privilege of discharging the responsibilities of the highest office of the country. But our democratic system has shown this by doing it," President Kovind added.

Earlier, the president travelled along with first lady Savita Devi Kovind in a special train to his native place The last President to use the presidential saloon in a train was APJ Abdul Kalam in 2006.