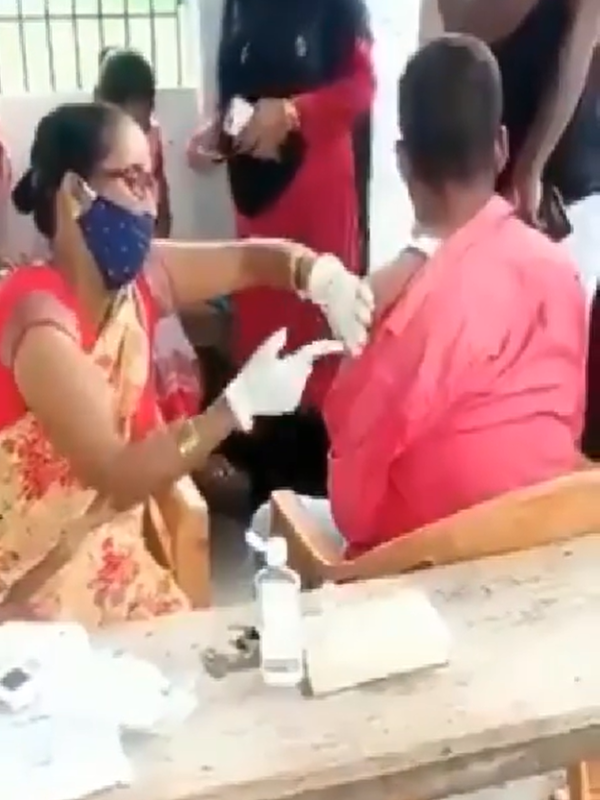 Chhapra/IBNS: A man was injected with an empty syringe by a nurse at a Covid-19 vaccination centre in Bihar's Chhapra.

The incident came to light after the video taken by his friend went viral on social media, prompting the authorities to remove the nurse from duty.

In the video, the nurse can be seen taking out a new syringe and straightaway jabbing the man with it without filling it with vaccine.

He realised after several hours that he had not been vaccinated at all after he saw the video, which was taken by his friend "just for fun" on his mobile phone.

"I realised about the mistake from the nurse only after my friend alerted me after watching the video," he was quoted as saying by NDTV.

Asked if he took another jab, he said he started getting a headache after an empty syringe was pushed into his blood.

His friend, who shot the video, said, "I made the video just for fun, to record his reaction while being administered the jab. While checking the video in the evening, we realised that the nurse just removed the plastic cover over the syringe and put it on my friend," stated the NDTV report.

The concerned officials have been informed about the vaccination centre, he said, adding that they have assured to look into the matter.

"A departmental enquiry has been initiated into the matter. The nurse was removed from duty on the same day and she has been put under suspension," an official with Bihar health department (Saran district) said.