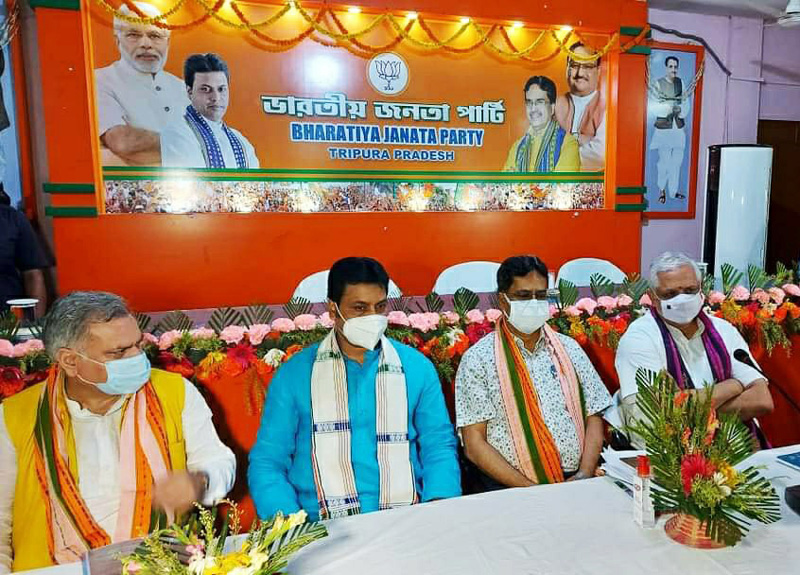 Trouble for Tripura BJP as 15,000 supporters joined TMC in one and half months

TMC state president Ashis Lal Singh said as many as 15,000 people from the ruling BJP have joined their party in the past and half months and everyday people are coming to the party fold overwhelmed by the success of the Mamata Banerjee government in West Bengal.

"Because of COVID-19 restrictions, we are not allowing mass joining and one from each family has been brought for taking our flag. In terms of voters, the figure must be more than 50,000 as of now. We are hopeful that by the middle of next month, Covid situation will improve and bigger shows will be exhibited then,” Singh said.

He said frustrated with the misrule of Biplab Kumar Deb led BJP-IPFT government, as of now about eight BJP MLAs have confirmed their allegiance to the TMC.

He said, “We have a single point agenda to dislodge this corrupt, vindictive and anti-people government from power as soon as possible to save the people of Tripura.”

Reacting to a statement of BJP leaders here regarding the failure of previous attempts of Trinamool in Tripura, Singh said the situation of today was not exactly five years before.

The Left has become a minority with a microscopic presence in India’s political landscape after 2014 general elections and the leftist’s rule in Tripura was an isolated incident.

"Today, BJP has appeared like a demon before the country and sensitive people of West Bengal ousted Modi and Amit Shah in the just-concluded assembly poll, which made people of the country realise the danger of BJP. Now, Didi has already called for ousting the saffron party from Indian politics and Tripura is our immediate target,” Singh underlined.

Criticising the state BJP leaders, he stated that nowhere in the country ruling party MLAs and senior leaders have been speaking openly against the Chief Minister except for Tripura.

The undemocratic attitude of Biplab Kumar Deb, persuading vendetta politics for destroying the state and institutional corruption for personal benefit has been hostile to the people in general and BJP leaders and MLAs in particular, he observed.

"If this government continues for a full term, Tripura will be like Kalahandi or Somalia. A large portion of the state budget and funds coming under schemes and projects is being looted by a small group. We are well aware of where the development funds of Tripura are going and invested in who’s project where.

"Everything will be exposed to the people of Tripura very soon to unmask the so-called ‘nationalists," Singh underscored.