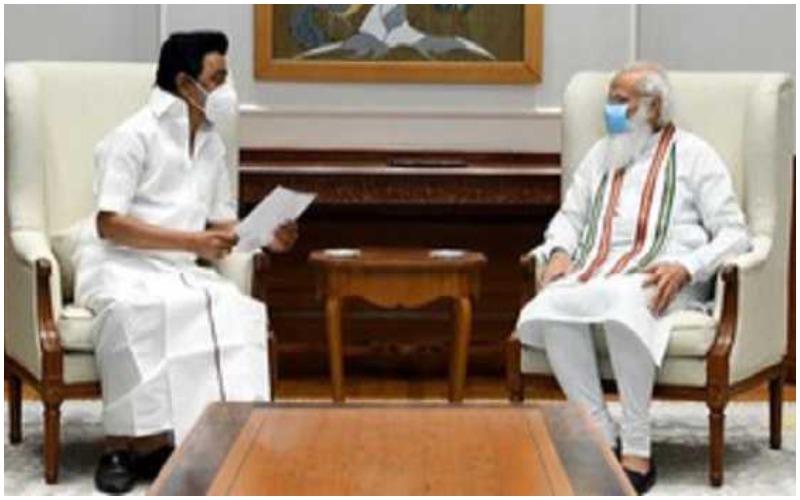 This was Stalin's first visit to Delhi after assuming office as the Chief Minister of Tamil Nadu.

Talking to reporters after the 25-minute meeting, Stalin said he was happy and satisfied with the outcome of the meeting with the Prime Minister.

They discussed various developmental projects concerning the state and Modi promised full cooperation from the centre, he added.

The prime minister also assured that he could be contacted at any time on issues concerning the state.

During the meeting, Stalin urged Modi to allot additional COVID vaccines for Tamil Nadu and take steps to start vaccine production in Chengalpet and Coonoor in the Nilgiris District.

He urged Modi to release the pending GST dues of the State, and requested to allow Tamil Nadu to increase the storage level in the Mullaiperiyar Dam to the full level of 152 ft, reject nod for Karnataka's Mekedatu dam project, and scrap NEET among other entrance exams.

He sought declaration of Thirukkural as a national treasure and asked for the retrieval of Katchatheevu--an islet ceded to Sri Lanka, expediting the setting up of AIIMS in Madurai, revocation of National Education Policy-2020 and the three Farm laws.

Additionally, he also asked the prime minister to provide concessions to people, who lost their livelihood due to COVID-19, declare Tamil as the official language in Madras High Court, Indian citizenship to Sri Lankan refugees in Tamil Nadu and implement steps towards the SethuSamudram project, which was launched during the erstwhile Congress-led UPA regime.

Matters discussed also included the implementation of 33 per cent reservation for women in Parliament and State Legislatures.

Replying to the question on the state government facing opposition for re-opening of Tasmac liquor outlets amid the second wave of the pandemic, Stalin said steps would be taken to reduce the number of liquor shops in a phased manner.