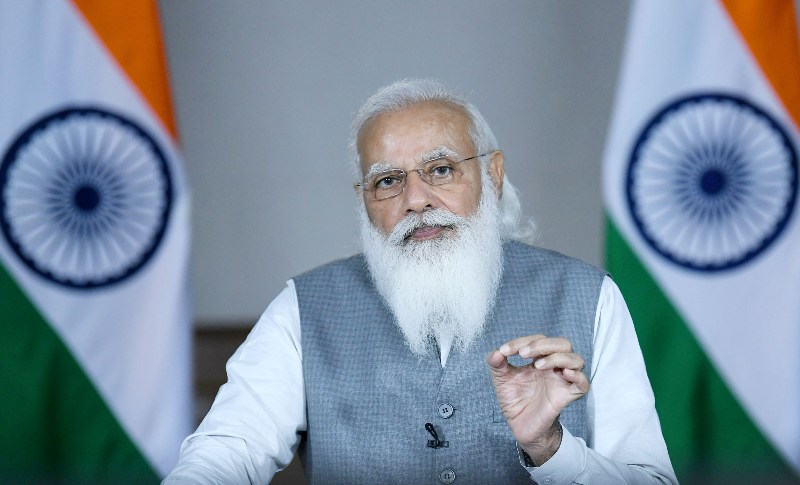 New Delhi: PM Narendra Modi delivered the keynote address at the 5th edition of VivaTech on Wednesday via video conference where he stressed on the need for 'insulating' the planet against the next pandemic.

The Prime Minister was invited as a Guest of Honour to deliver the keynote address at VivaTech 2021, one of the largest digital and startup events in Europe, held in Paris every year since 2016.

Speaking on the occasion, the Prime Minister said that India and France have been working closely on a wide range of subjects.

Among these, technology and digital are emerging areas of cooperation. It is the need of the hour that such cooperation continues to grow further, the PM said.

It will not only help our nations but also the world at large.

Modi mentioned Infosys providing tech support for the French Open tournament and collaboration involving French companies like Atos, Capgemini and India’s TCS and Wipro as examples of IT talent of the two countries serving companies and citizens all over the world.

“We could supply free food to 800 million people, and deliver cooking-fuel subsidies to many households. We in India were able to operationalise two public digital education programes- Swayam and Diksha - in quick time to help students,” the Prime Minister informed.

The Prime Minister praised the role of the start-up sector in meeting the challenge of the pandemic.

The private sector played a key role in addressing the shortage of PPE kits, masks, testing kits etc. Doctors adopted tele-medicine in a big way so that some COVID and other non-COVID issues could be addressed virtually.

Two vaccines are being made in India and more are in the development or trial stage. The Prime minister indicated that indigenous IT platform, Arogya-Setu enabled effective contact tracing. The COWIN digital platform has already helped ensure vaccines to millions.

The prime Minister said that India is home to one of the world's largest start-up eco systems. Several unicorns have come up in the recent years. India offers what innovators and investors need.

He invited the world to invest in India based on the five pillars of: Talent, Market, Capital, Eco-system and, Culture of openness.

The Prime Minister also stressed the strengths like, Indian talent pool, mobile phone penetration and Seven Seventy-Five million internet users, highest and cheap data consumption in the world and the highest use of social media to invite investors to India.

He also elaborated on efforts to nurture a culture of innovation.

"There are state-of-the-art innovation labs in Seven Thousand Five Hundred schools under the Atal Innovation Mission," the Prime Minister informed.

Talking about the disruption in different sector over the past year, the Prime Minister insisted that disruption does not have to mean despair. Instead, the focus should be kept on the twin foundations of repair and prepare.

“This time last year, the world was still seeking a vaccine. Today, we have quite a few. Similarly, we have to continue repairing health infrastructure and our economies. We in India implemented huge reforms across sectors, be it mining, space, banking, atomic energy and more. This goes on to show that India as a nation is adaptable and agile, even in the middle of the pandemic,” Modi said.

The Prime Minister also stressed the need for insulating our planet against the next pandemic. Ensuring we focus on sustainable life-styles that stop ecological degradation. Strengthening cooperation in furthering research as well as innovation.

The Prime Minister called upon the start-up community to take the lead in working with collective spirit and a human centric approach to overcome this challenge.

“The start-up space is dominated by youngsters. These are people free from the baggage of the past. They are best placed to power global transformation. Our start-ups must explore areas such as: Healthcare. Eco-friendly technology including waste recycling, Agriculture, new age tools of learning,” said the Prime Minister.

The Prime Minister emphasized that France and Europe are among India’s key partners. Referring to his conversations with President Macron, in summit with EU leaders in Porto in May.

The Prime Minister said that digital partnership, from start-ups to quantum computing, emerged as a key priority.

“History has shown that leadership in new technology drives economic strength, jobs and prosperity. But, our partnerships must also serve a larger purpose, in service of humanity. This pandemic is not only a test of our resilience, but also of our imagination It is a chance to build a more inclusive, caring and sustainable future for all,” concluded the Prime Minister.