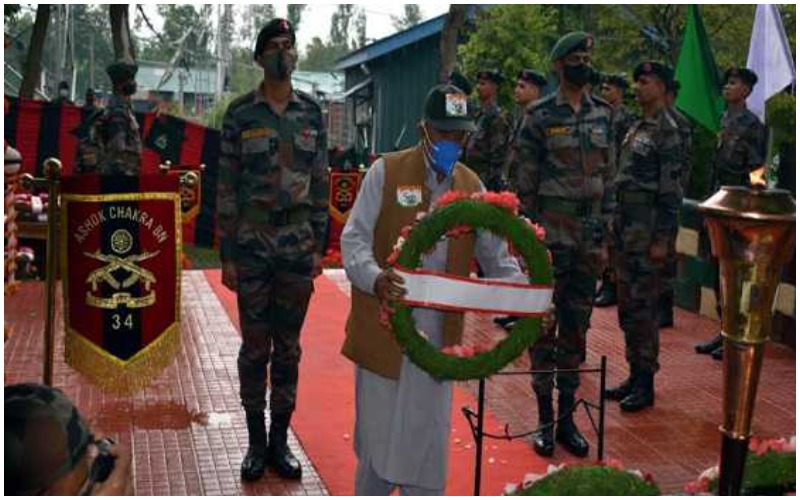 It received a venerable reception at Wuzur to commemorate 50 Years of India’s victory over Pakistan in the epic war of 1971 on Tuesday.

On Dec 16 2020, Prime Minister Narendra Modi lit the ‘Swarnim Vijay Mashaal’ from the hallowed and the eternal flame of National War Memorial that marked the commencement of this Golden Jubilee Year, a Defence Ministry spokesman said.

Chinar Corps in a tweet said the 'Mashaal' was received at Banihal-Ramban in Jammu region on Tuesday.

“1971 India-Pakistan war led to the creation of #Bangladesh. It demolished the 'Two Nation' theory of #Pakistan. The surrender of 93000 Pakistani troops is unparalleled in recent human history”, Chinar Corps further tweeted.

The spokesman added four such 'Mashaals' are traversing in the four cardinal directions, reaching the remotest corners of the nation to include villages of our valiant and intrepid warriors who participated in the war.

One of these 'Mashaals' entered Kashmir valley and was received by Commander 2 Sector Rashtriya Rifles at the northern portal of the Jawahar tunnel in south Kashmir.

The presence of three Ex-Service Men (ESM) and one Veer Nari of the 1971 war along with 10 Veer Naris and 36 ESM's during the event made it all the more memorable, he said.

Carrying of the 'Mashaal' by these esteemed guests during the event acknowledged their sacrifice and contribution to the eternally grateful nation.

The NCC cadets in attendance drew inspiration from the ceremony, further strengthening their resolve to join the Armed Forces and serve their motherland.

The grand reception of the 'Mashaal' was followed by a solemn ceremony held at the Wuzur Garrison to pay homage to the fallen heroes of that war and to remember the sacrifice they made in honour of their beloved motherland.

The ceremony concluded with the felicitation of the war veterans and veer naris as a mark of respect for their efforts.

Speaking to the media present, Commander 2 Sector Rashtriya Rifles expressed his gratitude to all the war veterans, veer naris, and ex-servicemen who made this event possible by their benign presence.

He added that the Indian Army continues to move forward with its ethos of honour, valour, and warrior code, thus, is always prepared and ready to defend the nation.