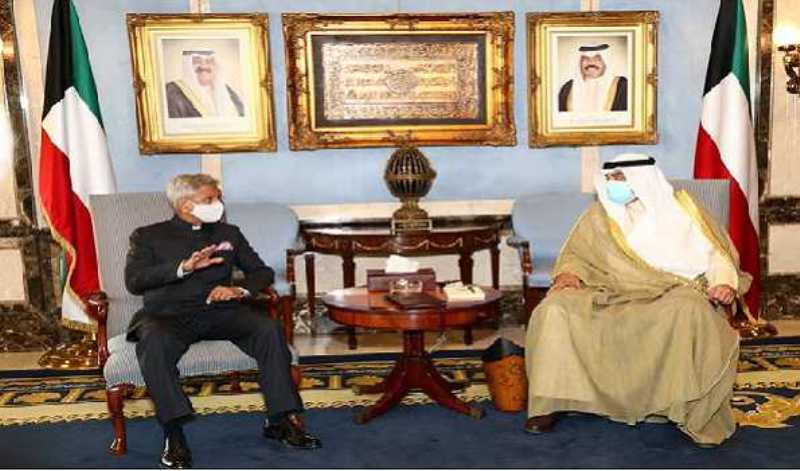 New Delhi/UNI: India and Kuwait have signed a memorandum of understanding providing Indian workers in the Gulf nation protection under law.

The MoU was inked in the presence of External Affairs Minister S Jaishankar, who is on three-day visit, and his Kuwait counterpart Sheikh Ahmad Nasser Al-Mohammd Al-Sabah on Thursday. It was signed by Ambassador Sibi George and Deputy Foreign Minister of Kuwait Majdi Ahmad Al-Dhafiri.

The two ministers welcomed the MoU, which, according to the Indian Embassy, "brings the Indian domestic workers in Kuwait within the ambit of a legal framework which streamlines their recruitment.and provides them with protection of law."

The MoU will introduce an employment contract ensuring the rights and obligations of both the employer and the domestic workers.

It seeks to establish a mechanism for 24-hour assistance to domestic workers.

The MoU provides for establishment of a joint committee for periodic review and assessment and to follow up the implementation of the MoU which will conduct annual meetings, according to a press release issued by the Indian embassy.

Jaishankar's visit at the invitation of Sheikh Ahmad Nasser Al-Sabah is part of the enhanced high-level exchanges in the context of 60th anniversary of establishment of diplomatic relations between the two countries.

Jaishankar thanked the Kuwait leadership for supplying liquid medical oxygen and other oxygen-related supplies to India to fight the second wave of the COVID-19 pandemic in the country.

They discussed the state of bilateral relations and also the developments in the region.

The two sides agreed to hold the first India-Kuwait Joint Commission meeting later this year and also to set dates for early meetings of the Joint Working Groups on health, hydrocarbon and manpower. They also agreed to set up new joint working groups in other areas of cooperation.