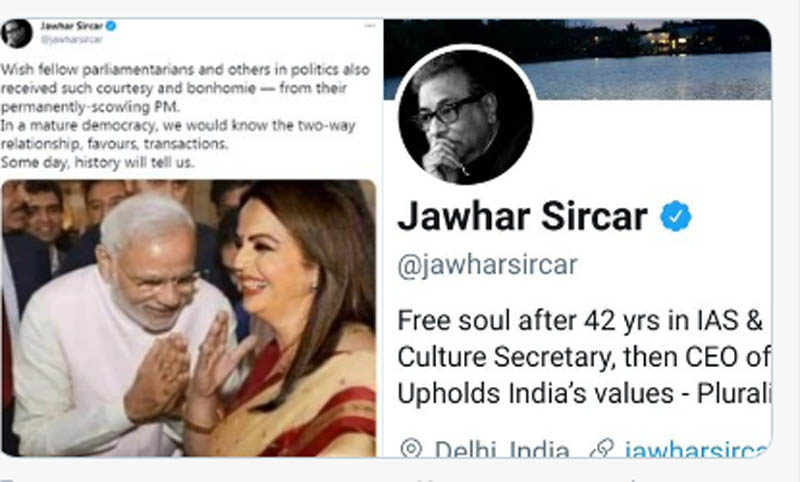 The tweet, which was deleted an hour after posting, had been shared 500 times by his followers.

The woman in the actual image is not Nita Ambani but a social worker, said media  reports.

“In a mature democracy, we would know the two-way relationship, favours, transactions. Some day, history will tell us,” the retired civil servant had written in his post in a bid to prove his point behind tweeting the image on his handle with more than 35,000 followers.

According to media reports, Nita Ambani’s face appears to have been lifted from a picture posted by Reliance Industries on Facebook in 2014.

Though Sircar deleted the tweet about an hour after posting the image, it had  been shared 500 times by then.

He admitted his mistake and shared another picture posted by Reliance Industries Limited in 2014 on their Facebook page.

“What’s not fake are his deep bonds with richest Gujs + their incredible growth in his tenure + bonhomie for them,” Sircar wrote.

Forsyth’s classic ‘Dogs of War’ DoW became hit movie in 1980. Ihad terrible experience as 2 photos of Modi r claimed as fake. What’s not fake are his deep bonds with richest Gujs + their incredible growth in his tenure + bonhomie for them. Wonder what crass DoW will now bark? pic.twitter.com/hITgU1kjfC

However, Sircar had to face the backlash from Twitteratis and Union minister Anyrahg Thakur calling on Sircar to apologise for sharing a fake image and Twitter to take appropriate action.

Will he apologise to the nation?
Will Twitter India take action?

Sharing Morph pic to payback his masters at 10JP, this @jawharsircar was CEO of Prasar Bharati. He has been doing this to seek better remuneration from Con-IT gang pic.twitter.com/vOGm5KHmO9

The original image was published for the first time by One India Hindi in 2018. The article said the image was clicked in 2015.

The woman in the original image is Deepika Mondol, a social worker who runs a Delhi-based NGO called Divya Jyoti Cultural Organisation and Welfare Society, according to the article.

The image seems to be popular with fake news and image creators. In December 2020, the image in which Mondol's face was replaced with the face of Priti Adani, wife of billionaire industrialist Gautam Adani, had gone viral on Facebook.

Among those who asserted that the woman in the image was indeed Priti Adani, included National vice-chairman of the Kisan Congress, Surendra Solanki and popular Facebook page ‘Political guruji’, said a Print report.

A similar image had gone viral showing PM Modi purportedly bowing before Adani’s wife. In the original picture, the prime minister was with the former Mayor of Tumkur, a city in Karnataka, added the report.