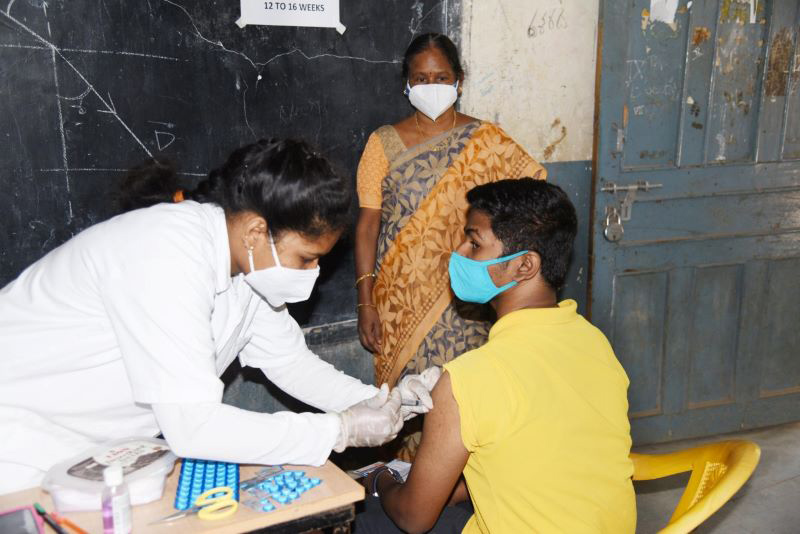 New Delhi/IBNS: The Supreme Court on Monday directed some tough questions to the central government over its COVID-19 vaccination strategy which is key in the middle of the pandemic.

Justice Chandrachud said, "We have some concerns. Now we have a spectacle, where different municipal corporations, different states are issuing global tenders.  We want to know, is this the policy of the Government of India that every Municipal corporation, every state is left to their own to get vaccine.

"Look at the capacity of BMC (Mumbai municipal corporation), it might have a budget comparable with some of our states. Does the Government of India contemplate that for the procurement for foreign vaccines, that there will be individual states or corporations  submitting bids or are you going to be a nodal agency for the bids?"

Justice Bhat has also said the bench wanted to see the files of the government policy to get an idea about the logic behind the steps.

"Till date we have not seen the policy document which articulates this..." he said.

Stressing on a uniform price of vaccines, Justice Chandrachud asked as quoted by Live Law, "You have to ensure that vaccines are available at the same price across the nation. You can't have a different price at the Centre and different at the states."

Justice Chandrachud has questioned the online registration process through the CO-WIN website in a country with a digital divide.

"You keep saying digital India, digital India, but you are not aware of the ground realities. A poor worker from Jharkhand has to go all the way to a  common centre? You can certainly have registration, but how will you answer the digital divide? How do you answer the question about migrant labourers who have to go from one State to another?" the judge asked.

In a showdown with the Centre over the vaccination drive, the Delhi government on Saturday questioned how the private hospitals in the national capital are getting anti-COVID-19 vaccines while the shots are not supplied to the city administration.

In a press conference, Delhi Deputy Chief Minister Manish Sisodia has accused the central government of having a "setting" with the private hospitals.

India, which has the second highest total COVID-19 caseload after the United States, is struggling to cope with the second wave of the deadly virus.

Above all, India is running out of anti-COVID-19 vaccines at a time the poor health infrastructure of the South Asian country is overwhelmed with the influx of patients.

Though the online registration for vaccines for all people aged 18 or more through CO-WIN website was opened late last month, people by and large are unable to book a slot to get the jab.

Many including the opposition parties have also pointed finger at the Centre's import of vaccines to other countries at a time 1.3 billion people of India are still at risk.