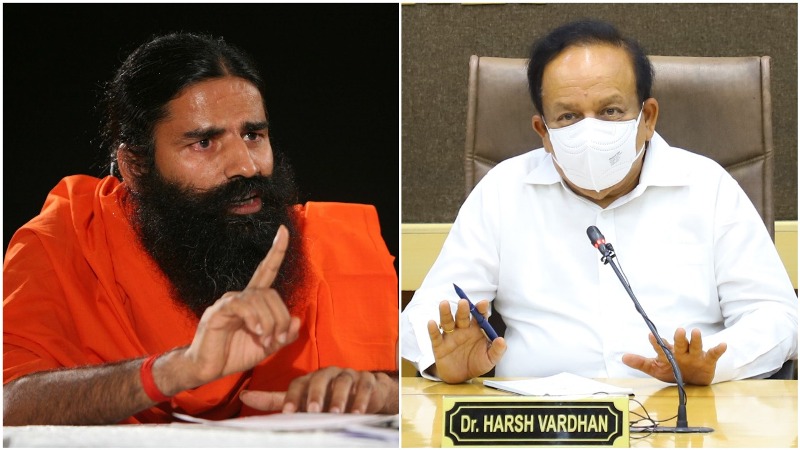 Take back your comment on allopathy: Harsh Vardhan writes to Baba Ramdev

New Delhi: Union Health Minister Harsh Vardhan on Sunday asked Yoga Guru Baba Ramdev to take back his comment on allopathy where he said that  more people died of modern medical treatments during the COVID-19 crisis than the coronavirus itself.

Sharing a letter he has written to the Yoga practitioner and a face of an alternative medicine empire, Harsh Vardhan tweeted in Hindi that he has asked him to take back his 'objectionable' statement.

He said doctors who fight against the virus day and night are like gods to the people of the country.

"Baba Ramdevji's statement has hurt the sentiments of the country by disrespecting the Corona warriors," he said.

"Enough is enough," IMA said, citing the pain and agony over the loss of over 1200 modern medicine doctors, and hitting out at Ramdev, adding the yoga guru was “repeatedly taking advantage of the situation and creating fear among the public to sell his illegal drug."

Ramdev is the face of Patanjali, India's one of the largest consumer goods and alternative medicine empires.

In a video that has gone viral on social media, Ramdev can be seen saying at a recent event, "Lakhs of people have lost their lives due to allopathic medicines, their number being far greater than those who died because they could not get treatment or oxygen."

The IMA said Ramdev even challenged the integrity of DGCI, headed by the health minister himself, as he claimed that Remdesivir, Favipiravir and all other approved drugs by DCGI have proven to be failures.

"When such idolised personal are making vitriolic comments, questioning the authority and integrity of the whole architecture of health ministry, the health minister, who himself is a practicing modern medicine allopathic postgraduate and the head of this ministry, should either accept the challenge and accusation of this gentleman and dissolve the modern medicine facility or boldly face and prosecute the person for his words of arson on the sovereignty of the country and book him under the Epidemic Diseases Act to save millions of people from such unscientific utterances," IMA wrote to the health minister.

"Remdesivir and Favipiravir are approved by CDSCO (Central Drug Standard Control Organisation) and were notified for use for the covid patient by the Central Government in June-July, 2020. The said Notification was made by the Centre under section 2A of the Epidemic Diseases Act, 1897. Therefore, u/s 3 of the Epidemic Disease Act read with Section 188 of IPC, Swami Ramdev deserves to be prosecuted for disobeying and causing danger to the life of many by making them believe and make them not to take the advice of allopathy drugs," IMA said.

The top medical body served Ramdev a legal notice demanding a written apology and withdrawal of the statements.

It also said Ramdev had damaged the reputation of practitioners of allopathy and modern medicine when they are combating to save lives during the deadly pandemic.

The apex medical body said Ramdev stated, "Allopathy ek aisi stupid aur diwaliya science hai" and he even went on to call the modern medical doctors “murderers” in the presence of the health minister while releasing his medicines.

The IMA said that despite continuous attacks on modern medical science, Yoga Guru and his associate resort to it whenever they fall sick.

"However, it is a well-known fact that the Yoga guru and his associate Shri Balkrishna have been taking modern medical allopathy treatment as and when they contract illness," the IMA said.