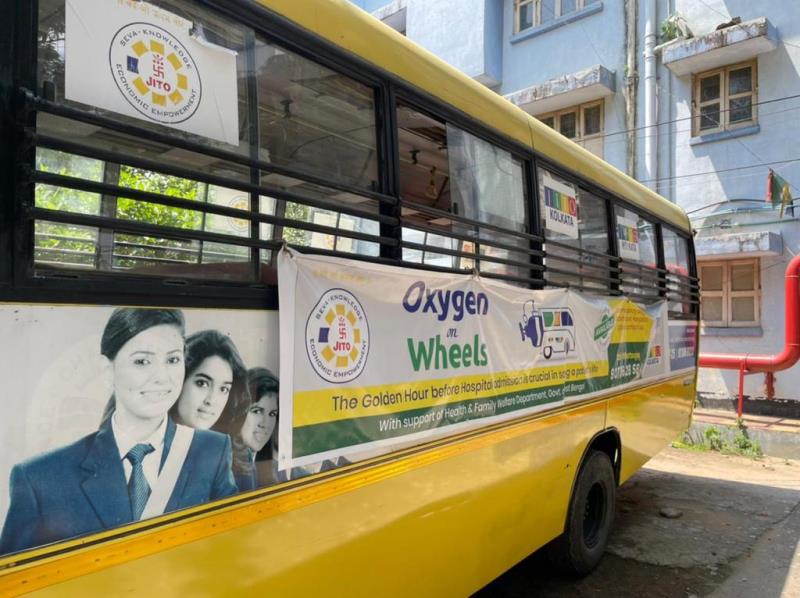 Kolkata/IBNS: At a time when the entire nation is struggling to cope with the second wave of Covid-19, JITO (Jain International Trade Organisation), a non-profit body of the Jain community, has launched the “Oxygen on Wheels” bus concept in Kolkata.

Working closely with the West Bengal Department of Health and Family welfare, JITO introduced the first Oxygen on Wheels Bus in Kolkata on May 11 in Kolkata.

The bus includes a bus equipped with four oxygen concentration machines OF 5 LPM. The bus is also equipped with fans, mobile charging points, and redesigned seats to make patients comfortable and reduce their suffering. At any given time up to four patients can be serviced within the bus.

It will be stationed at government hospitals for patients waiting to be admitted and in need of oxygen. A health technician by the hospital will be provided for giving oxygen support. The entire admission of patients inside the bus will be at the sole discretion of the management of government hospitals.

The hospital will also be supplying the electrical power required to operate the oxygen concentrators. The bus will be moving from one location to another and stationed at any of the state hospitals in the direction of the health department. The Oxygen on Wheels bus has been presently deployed at the NRS Medical College and other government hospitals of Kolkata.

At the inauguration, Alapan Bandyopadhyay said, “West Bengal Govt. is working day in and out to ensure oxygen to every Covid patient in need. We appreciate this initiative on behalf of the West Bengal government and health department to serve mankind when it’s needed.”

Rajesh Bhutoria, chairman, JITO Kolkata Chapter said, "JITO Kolkata is blessed to serve the people of Bengal with Oxygen on Wheels in association with RDB Group. We believe this is the time when we all should unite and come forward to serve mankind and emerge successful against the deadly Covid-19 virus.

"We are also grateful to S.L. Dugar Charitable Trust and their trustees’ Sheetal Dugar and Vinod Dugar for providing all the buses for this noble cause.”