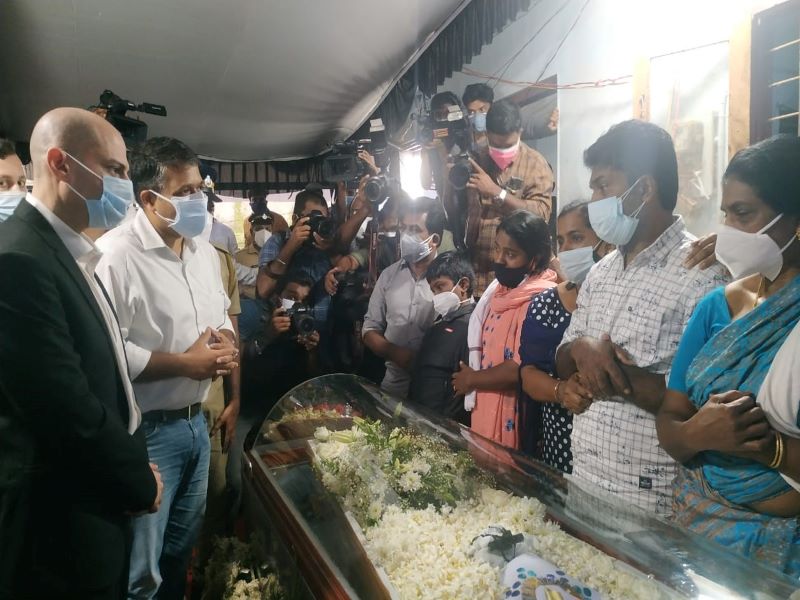 Idukki/IBNS: The funeral of Soumya Santosh, the Indian nurse, who was killed in a rocket attack by Palestine in Israel's Ashkelon, was held at Nithya Sahaya Matha Church, Keerithodu in Idukki on Sunday afternoon, media reports said.

The mortal remains of Soumya Santosh, who was killed last Tuesday in the attack, arrived in Keerithodu, her native village on Saturday.

The body was subsequently flown to Kochi in an Air India aircraft and then taken to Idukki.

"CG, @Jonathan_Zadka, paid a visit to the family of Soumya Santhosh who lost her life during #Hamasattack on #Israel. On behalf of the Israeli people, @israelinbenguluru extends its condolences to the family at loss. We hope peace restores soon," the Consulate General of Israel to Bengaluru said in a tweet.

CG, @Jonathan_Zadka, paid a visit to the family of Soumya Santhosh who lost her life during #Hamasattack on #Iseael. On behalf of the Israeli people, @israelinbenguluru extends its condolences to the family at loss. We hope peace restores soon 🙏🏻 https://t.co/pYw2t322I4

"Honoured to pay my respects and convey our sympathies to the family and friends of Soumya Santosh as she was laid to rest in her home town Keerithodu, Kerala. May she RIP our prayers are with the family that lost an angel in a cowardly hamas terror attack," Zadka tweeted.

Honoured to pay my respects & convey our sympathies to the family and friends of Ms. Soumya Santosh as she was laid to rest in her home town Keerithod, #Kerala.
May she R.I.P 🙏🙏 our prayers are with the family that lost an angel in a cowardly #hamasterror attack. pic.twitter.com/CoeH0haOWn

Idukki MP Dean Kuriakose, who was present at the Kochi airport to receive Soumya 's body on Saturday, also reached her home and later at the church.

Soumya was working as a caregiver to an elderly lady in Israel's Ashkelon, a southern coastal city, bordering the Gaza Strip.

The city has come under a massive mortar attack, in which 31 people have been killed.

According to a Times of India report, Soumya's sister-in-law Sheryl Benny has said the house where Soumya stayed did not have a bunker though rocket attacks are common in Israel and everybody moves into them as soon as they hear the siren warning them of an attack.

Soumya was waiting for the daughter of the elederly woman to arrive and couldn't leave her immediately even as the bombing started, the report added.

On Thursday, Israel's Deputy Envoy to India Rony Yedidia Clein said that the Israeli authorities will take care of the Soumya's family.

"The family will be taken care of by the Israeli authorities in compensation for what happened, although nothing can ever compensate for the loss of a mother and wife," Clein said.

We've been in touch with the family. She was talking to her husband when this happened& I can imagine how horrendous it's for the husband. I can only sympathise with what he must be feeling: Israel's Dy Envoy, to ANI on Kerala woman who died in Palestinian rocket strike on Israel pic.twitter.com/GPFHhDuy9c

Tensions between Israel and Hamas, a Palestinian organisation, dramatically escalated and spread across Israel in the past few days.

Both sides have made intensive airstrikes at each other that have not been seen in the recent times.

The ongoing violence was precipitated by threat of eviction of Palestinian families from East Jerusalem by Jewish people which triggered  protests and clashes with the police.