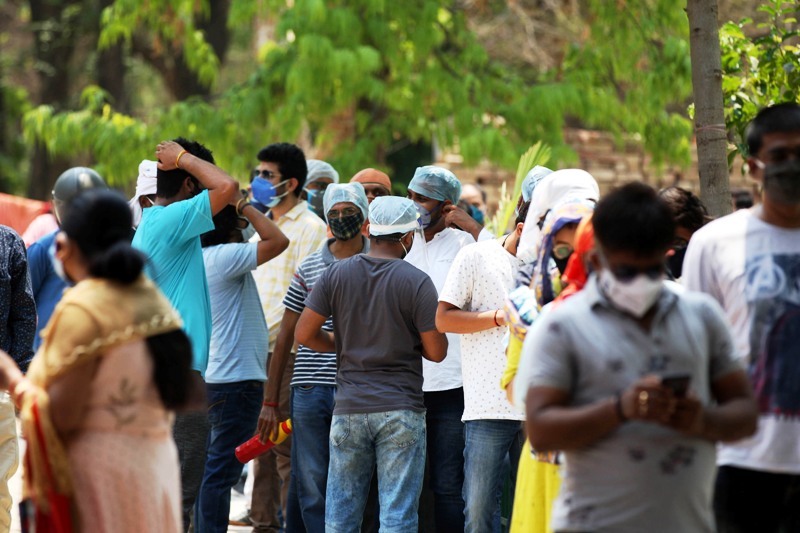 IndiaFightsCorona
People waiting for a dose of vaccine at a venue in Prayagraj/ credit: UNI

New Delhi/IBNS: Nearly 90 per cent of India is witnessing a high Covid positivity rate, the government said on Tuesday adding that 640 districts out of the 734 are above the national threshold level of 5 per cent positivity rate.

The active cases have spiked up massively as the country has been badly hit by the second wave of the deadly virus leaving the health system in India overwhelmed with a shortage of beds, oxygen, medicines as well as vaccines.

The vaccination programme in India which started on Jan 16, was last month widely expanded to include citizens above 18 years of age as a part of the Centre's Liberalised Pricing & Accelerated National COVID-19 Vaccination strategy.

However, most of the states are struggling to vaccinate those between 18-44 years of age group owing to a shortage of vaccine supply from the Centre.

So far, 17.27 crore people have been administered with vaccines, the Centre said in a statement.

He also informed that multiple initiatives have been taken to increase the oxygen supply.

"To improve O2 availability, production has been increased & PSA plants have been set up. To enhance tanker availability, nitrogen & argon tanks are being converted," said he.

The Indian Council Of Medical Research (ICMR) has revised norms for testing with a particular focus on rural India.

ICMR said the focus should be on Rapid Antigen Tests which will help in surveillance and aid in breaking the chain of command rather than RT-PCR tests.

"There is no need to do a second RT-PCR test and we are now moving from a 70-30 ratio of RT-PCR to the reverse of more Rapid Antigen Tests," said ICMR Director General Dr Balram Bhargava.

Meanwhile, Cabinet Secretary Rajiv Gauba chaired the 33rd meeting with the States and UTs to review the COVID situation in the country. The meeting was attended by Chief Secretaries and Health Secretaries of all States/UTs.

Gauba briefed the states on the action taken by the Central government in controlling the effect of the COVID pandemic since last year and shared with them the work done by the Task Force and Expert Groups constituted by the Centre on crucial matters like improvement and augmentation of health infrastructure, research & production of vaccines, welfare of poor people, vaccination and supply of oxygen.

He assured that no stone would be left unturned to provide timely oxygen supply and other medical resources to the hospitals.

Expressing his concern over the misinformation on the subject of vaccination, Gauba mentioned that all vaccines that are procured either by the Central Government or the State Governments, are actually meant for the public in the States and there is no consumption at the Central level.

The Health Secretary requested the States/UTs to prioritise in terms of testing, intensive action and local containment of the pandemic, strengthening of hospital infrastructure, augmentation of human resources, rational utilisation of oxygen, etc.

He informed about the plan to instal 1213 PSA plants within the next three months. Reiterating the judicious use of vaccines, he stressed the need for an awareness campaign on the importance of completion of both doses of vaccination, for better immunity.