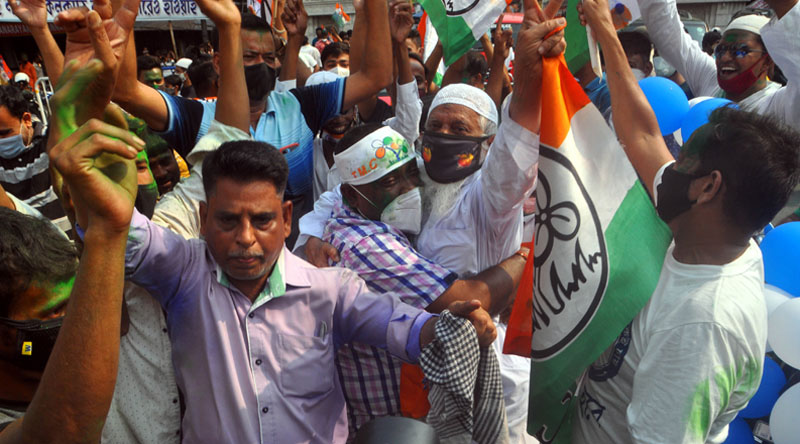 Kolkata: Even as Chief Minister Mamata Banerjee appealed for calm, West Bengal is roiled by large-scale post poll violence claiming at least a dozen lives so far while the opposition parties' leaders and workers are being attacked and their property looted, according to media reports and the opposition parties.

Opposition alleged that Trinamool Congress (TMC) is holding 'small' victory rallies across the state flouting Election Commission's order. The  Opposition shared videos and images of widespread political clashes.
West Bengal's opposition parties said they have been witnessing an action replay of 2011 in just two days since the result of the assembly election was declared.
From the Left, Congress, and Indian Secular Front (ISF)'s Sanjukta Morcha to Bharatiya Janata Party (BJP)— all the opposition parties are alleging violent attacks on their workers and properties by the alleged activists of the TMC which has made its hat-trick of wins in the state.
At least 12 deaths have been reported in political violence so far since Sunday.

Dilip Ghosh, president of the BJP which has emerged as the main opposition in Bengal, on Monday alleged that at least six people, including five party workers, were killed in the political clashes and attacks.
"At a time when the Covid-19 crisis is at its peak, unfortunately, there is large-scale post-poll violence in West Bengal which has killed six persons, including five party activists, in just 24 hours since the results were declared," Dilip Ghosh said.

After results for West Bengal assembly came in, TMC goons burnt down BJP’s party office in Arambagh... Is this what Bengal will have to suffer for the next 5 years? pic.twitter.com/5GBKLmirGQ

BJP's Suvendu Adhikari, who has defeated TMC supremo Mamata Banerjee in a cliffhanger in Nandigram, alleged attacks on his party workers by the TMC.

Other Bengal-based BJP leaders also raised multiple allegations of violence and political clashes across the state.

In coochbehar Natabari,Dinhata, Sitai assembliesTMC goons are attacking Hindu Houses,breaking Temple's, raping woman's and killing people.This is what new Govt is doing after coming in power. I strongly condemns this and urging MHA and @jdhankhar1ji to intervene at the earliest. pic.twitter.com/RUMc2X8li2

Commenting on Bengal violence, former Rajya Sabha MP, Swapan Dasgupta, wrote on Twitter: "Some 2.28 crore people in Bengal voted for BJP. Do they not have human rights & democratic freedoms? What is happening in W Bengal is an assault on Indian democracy. I am not pleading; I am demanding administrative action to stop the violence. The alternatives are unpalatable."

Some 2.28 crore people in Bengal voted for BJP. Do they not have human rights & democratic freedoms? What is happening in W Bengal is an assault on Indian democracy. I am not pleading; I am demanding administrative action to stop the violence. The alternatives are unpalatable.

BJP's national president J.P. Nadda has reached Kolkata and he will visit the locations where BJP workers were attacked and their properties were vandalized.

The BJP has already announced to hold nationwide dharna, maintaining Covid protocols, to protest the post-poll violence in West Bengal on Wednesday (May 5) when Mamata Banerjee will swear in as Bengal Chief Minister for the third consecutive term.

The BJP has announced a nationwide dharna on 5th May against the widespread violence unleashed by TMC workers post the election results in West Bengal.

This protest will be held following all Covid protocols across all organisational mandals of the BJP. 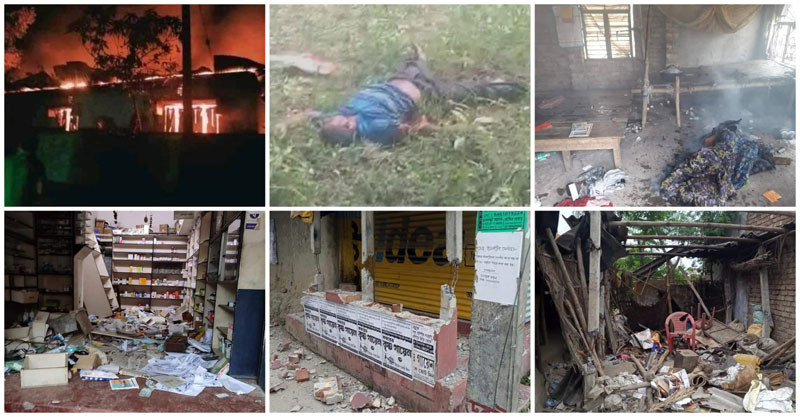 Condition of other oppositions:
Sanjukta Morcha's two major allies- Congress and Left parties, which have failed to win a single seat in the election for the first time since independence, also claimed a series of attacks on their party offices as well as their workers and their properties.
CPI-M general secretary Sitaram Yechury shared a glimpse of Bengal's current situation on Twitter.

Are these reports of gruesome violence in Bengal TMC’s ‘victory celebrations’?Condemnable.
Will be resisted & rebuffed.
Instead of focusing on combating the pandemic TMC unleashes such mayhem.
CPI(M), as always, will be with the people to protect, assist, providing relief. pic.twitter.com/zZUSfNH4wn

CPI-M also claimed that a 52-year-old woman supporter of the party was hacked to death by TMC in East Burdwan's Jamalpur.

Comrade Kakali Khetrapal, a 52-year-old CPI(M) worker from Nabagram in East Burdwan's Jamalpur was hacked to death on Sunday. Trinamool members, celebrating their election victory, allegedly entered her home while she was cooking and attacked her with a sharp weapon. pic.twitter.com/yN8mCNNelB

"After TMC came to the power in West Bengal in 2011, CPI-M and other Left parties had to face the same violent attacks which we are facing right now, when we have no representative in the state assembly and our comrades (red volunteers) are busy in helping the Covid patients," a CPI-M leader told IBNS.
Meanwhile, several Bengal-based leaders of the Congress party also reported attacks on their supporters, though most of the national-level leaders of the party were seen silent on the issue.

Our Chhatra Parishad activists Mir Sahin attacked by TMC goons, they assaults & beaten his family very badly (Children to Women), vandalised everything in his home.

In which jungle raj we are living under the regime of Mamata Banerjee?
1/2 pic.twitter.com/nRr6cf8KVP

Abbas Siddiqui's ISF, which partnered Congress and Left in the election, and won the TMC bastion Bhangar assembly seat, alleged that its activist was killed in a crude bomb attack by TMC in North 24 Parganas' Deganga.
Administrative movements:
After receiving multiple reports of violence, the Union Ministry of Home Affairs (MHA) on Monday sought a report from the Bengal government.

Meanwhile, Bengal governor Jagdeep Dhankhar on Monday held meetings with the state Home Secretary, Director General of Police, and Kolkata Police Commissioner on the rising political violence in the state.

He has been urged to take all possible measures to ensure accountability of officials concerned. pic.twitter.com/sudmDapbPp

DGP @WBPolice and Commissioner @CPKolkata summoned by me in the wake of continually rising post poll incidents of arson, looting and violence as also killings in the State were indicated of alarming scenario.

Called upon them to take all steps to restore law and order. pic.twitter.com/BcblaimLeO

The governor on Tuesday claimed that Prime Minister Narendra Modi had dialed him to discuss the post-poll mayhem in West Bengal.

Concerned must act in overdrive to restore order.

Meanwhile, the Election Commission of India (ECI) has deployed 105 companies of Central paramilitary forces for the next 10 days to assist the state police in combatting post-poll violence, though oppositions are alleging that both the local police and CAPF are inactive and taking no action to bring the situation under control.
Mamata's appeal to maintain peace:
Saying that combating Covid-19 is her main priority, TMC chief Mamata Banerjee has appealed to her workers to maintain peace in the state, not to hold any victory rally amid the pandemic and not to engage in any political clash.
Opposition leaders alleged that no effect of Mamata's appeal had been noticed in her party workers as they continued to rage across the state.
Related Images