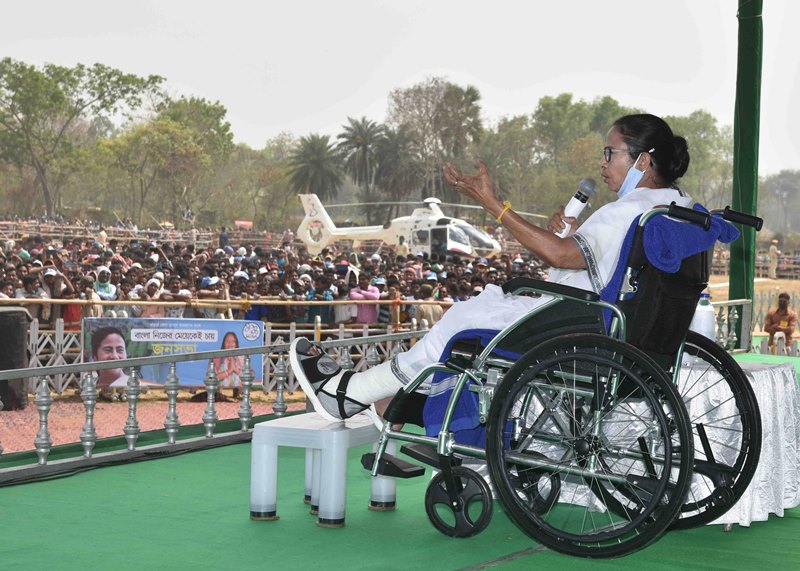 New Delhi/IBNS: Days after West Bengal Chief Minister Mamata Banerjee had accused some observers of the Election Commission of India (ECI) of performing biased role at the behest of the BJP during the ongoing assembly election in the state, the poll body on Sunday evening dismissed the Trinamool Congress (TMC) chief's claim and stated that her remarks against the ECI officers were 'absolutely baseless, false and misleading', officials said.

"A section of the media have reported about allegations made by Hon'ble Chairperson AITC and CM West Bengal that instructions have been given by some officers of ECI and Observers to arrest 'TMC goons'.  Such statements supposedly attributed to ECI Officers and Observers are  absolutely baseless, false and misleading," an ECI statement said.

"No such instructions have been given by any Observer, Chief Electoral Officer or Officer of the Commission to act against workers of any Party," the statement read.

Earlier on Saturday, while addressing her party workers in Birbhum's Bolpur, Mamata Banerjee lambasted the ECI over its alleged bias to 'help' the BJP in the ongoing polls and she also produced printouts of purported Whatsapp chats between the EC observers and some government officials.

“In a Whatsapp group, ECI observers were instructing district officials and state police to arrest TMC goons and keep them in preventive detention. They are saying ‘as per plan’. TMC workers have been given the name of ‘trouble mongers’. I have decided to move the SC to ensure elections are held impartially in future,” Mamata said at the virtual event.

Mamata Banerjee also said that she will move to the court against the ECI after the election is over in the state.

Reacting to this, Election Commission stated: "It has also been reported that CM would be taking the matter to the honourable Court, and no court case has so far been reported to CEO, West Bengal's office or the Commission where any instance of preventive action against a non-criminal has come to the notice."

"Misleading narratives apart, leave alone any court case, no specific instance of illegal preventive action against any worker of party has been reported till April 25," the ECI statement read.

The poll body also stated that it is a very common practice by all the law enforcement agencies to take preventive legal actions against miscreants and history sheeters who have potentials vitiate the polls.

"Conduct of free, fair, intimidation free and violence free election requires close monitoring of all miscreants and history sheeters who have the potential to vitiate the polls. Preventive actions under relevant provisions of CrPC, IPC are taken by all law enforcing agencies to ensure they are prevented from creating any mischief," the EC statement read.

"There are standing instructions for law enforcing agencies of all poll going States to ensure compilation of list of miscreants based on criminal history, including involvement in election related crime in the past. Action is taken and must be taken against such miscreants who have potential of scaring genuine voters in any manner," it added.