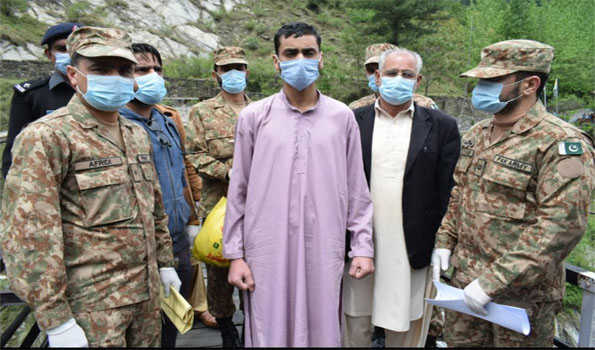 Srinagar/UNI: A Kashmiri youth, who had inadvertently crossed over to the other side of Line of Control (LoC) into Pakistan occupied Kashmir (PoK) last year, was repatriated from border town of Karnah in north Kashmir district of Kupwara.

Defence Ministry spokesperson Lt Col Emron Musavi on Tuesday said that inadvertent crossings across Line of Control (LoC) by locals on either sides of it have been an occurrence due to rugged terrain. 'In one such crossing, a youth from Bandipura, identified as Mohammad Sayeed Mohinuddin belonging to border town of Gurez, crossed into forward areas of PoK in September last year,' he said.

He said proactive coordination by Indian authorities has enabled repatriation of the youth on Tuesday at Tithwal Crossing Bridge.

'At around 1155 hrs, the 18-year-old boy was taken over from Pakistan authorities at Tithwal crossing Bridge in Karnah amidst the emotional backdrop of the boy's joyous brother,' he said.

Lt Col Musavi said interaction with the locals of Tithwal revealed that there has been a marked decrease in the inadvertent crossings over due to strict vigil on the LoC. 'The locals also added that it is the responsibility of the parents to ensure that their children do not go astray and put their lives into risk by venturing into hostile area,' he said.

He said Tithwal Crossing Bridge located on Kishanganga river has been acting as a point of peace between the two sides.

'It would be pertinent to highlight that the site is visited by lots of people from either sides and is emerging as tourist site especially after the recently agreed ceasefire between India and Pakistan,' he said, adding the peace and tranquility as a result of the agreement, is being appreciated by the civil population on either sides of LoC.