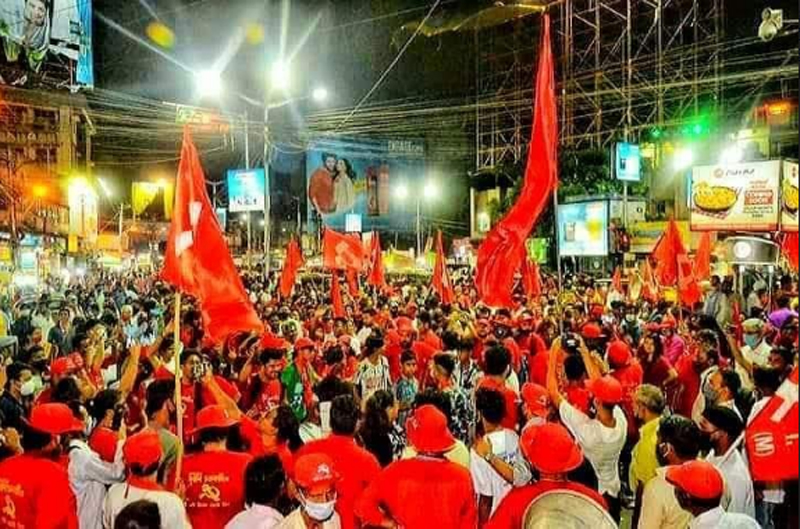 Kolkata/IBNS: In the wake of the rapidly rising cases of Covid-19 in India as well as in West Bengal, the CPI-M led Left Front has decided not to hold any more large political gatherings to appeal votes for the remaining phases of Bengal assembly polls.

During a presser in Kolkata, CPI-M politburo member Md. Salim on Wednesday said that the party will hold small street meetings, door-to-door campaigns and election campaigns via the internet instead of holding bigger poll campaign rallies and larger political gatherings to contain the spread of novel coronavirus while the country is facing the second wave of Covid-19.

"Campaign period for the fifth phase of Bengal polls, which is scheduled to be held on Apr 17, is about to get over as the Election Commission has extended the silent period for the phase to 72 hours, and as a responsible political party, we won't hold any more large campaigns for the remaining three phases of the election," Md. Salim said.

"All the party-men holding small street rallies as well as door-to-door campaigns have been directed to follow all the precautionary norms of Covid-19 while reaching out to the people," Salim added.

~ @CPIM_WESTBENGAL has decided to refrain from organizing big gatherings during the remaining phases of the ongoing #WestBengalElections2021 .
Instead emphasis will be laid on door-to-door campaign and on social media-based propaganda.#Vote4Left #Vote4SanjuktaMorcha pic.twitter.com/8DBauClC6t

Since the election process began, West Bengal has been witnessing multiple large political gatherings, public meetings and roadshows, which are being held by all the political parties, every day amid a tsunami of Covid-19 cases in the state as well as in the entire country.

In the last 24 hours, India recorded 1,85,248 fresh Covid-19 infections and 1026 covid-related fatalities when 5892 new cases and 24 deaths were reported during the same period from West Bengal where an eight-phase assembly election is currently underway.