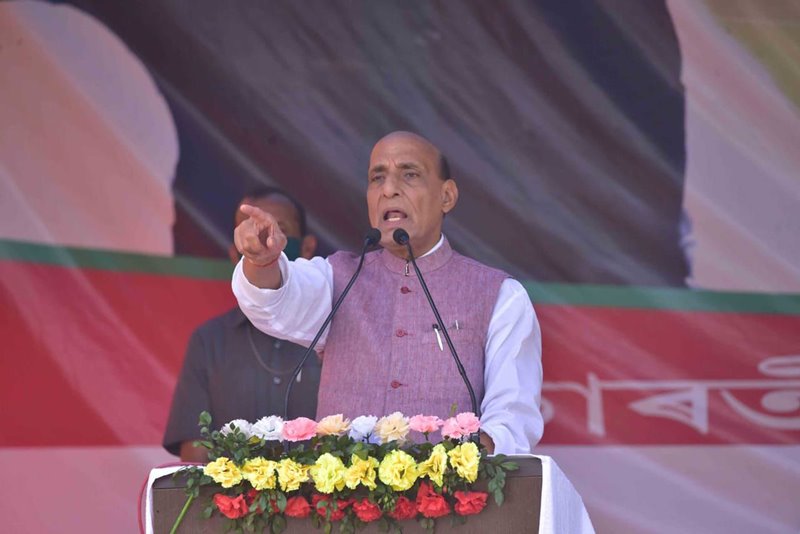 Swarupnagar/UNI: Senior BJP leader and Defence Minister Rajnath Singh on Tuesday lashed out at West Bengal Chief Minister Mamata Banerjee over her adverse comments on the poll body, saying the TMC supremo's outburst was a result of her frustration because
she realised her imminent defeat on May 2.

Addressing a BJP rally for party candidates for North 24 Parganas, Singh also slammed the TMC leader for blaming others for everythung, even the prime minister ( Narendra Modi) of the country.

Her continued attacks against the PM and the poll body ( Election Commission) were the results of her frustration for being isolated from the people for her ten years to misrule in West Bengal, said Mr Singh.

Banerjee has been critical of the ECI since the poll body announced an eight-phase elections and deployment of record number of central forces to ensure peaceful polling for 294 seats across the state.

Singh said Mamata Didi has now released her imminent defeat in the elections and she was now making all dramas in the politics.

The defence minister said the questioning the Election Commission order to ban her from campaigning was not justified.

He said that the poll body is an independent body and takes decisions after deliberations of the events and adding that it will lead to anarchy if such decisions were not taken for safeguard of democracy.

The EC has barred the TMC leader from campaigning for 24 hours citing the Model Code of Conduct violation and Ms Banerjee to protest it began a dharna near the Mahatma Gandhi statue in Maidan from 12 noon.

" She’s now against the Election Commission. Didi, can you spare anyone?” asked Singh.

He also charged the TMC with polarising the electorate by her speech, even on the central forces,who are here to ensure peaceful polling.

“You talk nonsense about our PM. Why do you blame him for everything? I have also been a CM and I know how a CM should behave," he said.

Singh assured that the BJP if voted to power will stop political violence in Bengal.

“Law and order is the responsibility of the state government. Political activists are being killed. We will stop this kind of violence when our government is formed and the political workers and general public of every party will feel completely safe here,” he said.

“Mamta Di asked the people of the Minority community to unite. In Bengal, where leaders like Subhash Chandra Bose worked for the unity of the country, the Chief Minister says that the minorities should unite. Does saying this suit any politician. People of Trinamool want to break the society,” said the Defence Minister.

Referring to Banerjee’s recent speech, Singh said that the BJP’s promise of 33 per cent reservation for women in government jobs will be fulfilled first on priority basis.