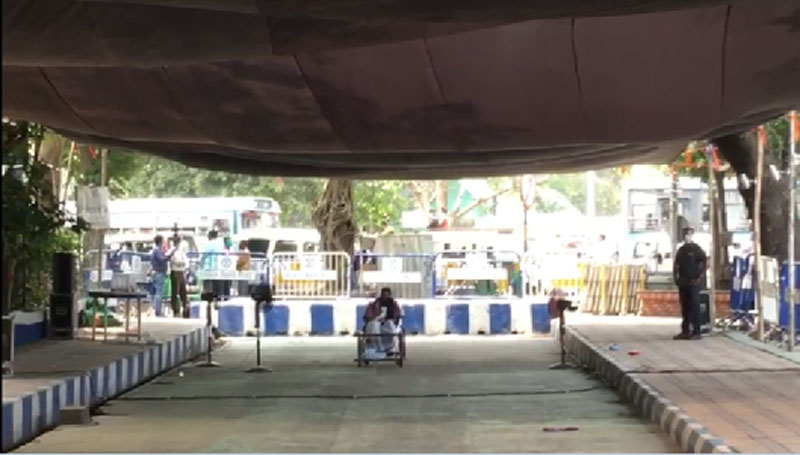 Kolkata/IBNS: West Bengal Chief Minister Mamata Banerjee on Tuesday began her dharna near Gandhi statue in downtown Kolkata in protest against the Election Commission (EC)'s ban on her campaign for 24 hours.

Mamata has been seen sitting all alone in a wheelchair with no poster or banner or slogan near the Gandhi statue on the busy streets of the city.

The EC has banned her campaign for a day over her alleged communal remark where she urged Muslim voters to unitedly vote for her Trinamool Congress (TMC) in the ongoing assembly polls and also for directing women to 'gherao' (restrain) the central armed paramilitary forces (CAPF) during the elections.

According to an order issued by the EC, Mamata has been barred from campaigning from 8 pm on Monday to 8 pm on Tuesday.

With the campaigning for all political parties for the fifth phase of elections to be stopped from 10 pm on Tuesday, Mamata, in a bid to utilise the two hours after the ban lifts, will address public meetings in Barasat at 8:15 pm and Bidhannangar at 9 pm.

The banning of campaigns of high-profile politicians during the polls is not new in the Indian politics.

During the 2019 Lok Sabha elections, Uttar Pradesh Chief Minister Yogi Adityanath and his predecessor Mayawati were banned by the EC from campaigning on the communal grounds.

While Adityanath, a cleric, was banned for three days, Mayawati, a Dalit leader, was barred from campaigning for two days.

However, TMC leaders as well as several opposition politicians have accused the EC of being biased as the commission has not pulled up the BJP leaders who have openly given calls for alleged violence.

Among a few saffron leaders, BJP state president Dilip Ghosh had said people, who would obstruct the poll process, would be shot to death by the central forces in the similar manner five villagers were killed at Sitalkuchi in Cooch Behar on Apr 10.

In a recent development, BJP leader Rahul Sinha, who had said the central forces should have shot to death eight people in Cooch Behar, has been banned from campaigning for 48 hours by the EC.