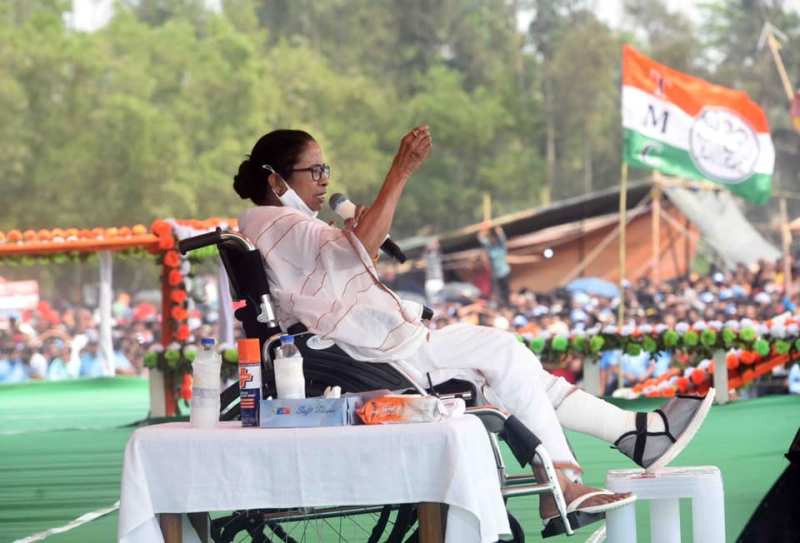 According to an order issued by the ECI, Trinamool Congress chief Mamata Banerjee cannot hold any kind of election campaign from Monday (Apr 12) 8 pm. till Tuesday (Apr 13) 8 pm.

The commission took the action against Mamata Banerjee after it had found her remarks highly insinuating and provocative laden with a serious potential of the breakdown of law and order, and thereby adversely affecting the election process.

The poll body has also advised Banerjee to desist from using such statements while making public utterances during this period when the Model Code of Conduct (MCC) is in force.

Earlier, the ECI had served to show-cause notices to the TMC supremo over her appeal for votes on religious ground and 'gherao CRPF' remark.

After Mamata's answers to those notices failed to satisfy the ECI, the poll body has slapped a campaign ban on her for 24 hours.

Reacting to the matter, Mamata Banerjee said that she will sit on a dharna in Kolkata on Tuesday to protest against the ECI's campaign ban on her.

"To protest against the undemocratic and unconstitutional decision of the Election Commission of India, I will sit on dharna tomorrow at Gandhi Murti, Kolkata from 12 noon," she tweeted.

To protest against the undemocratic and unconstitutional decision of the Election Commission of India, I will sit on dharna tomorrow at Gandhi Murti, Kolkata from 12 noon.

BLACK DAY in our democracy.

Party spokesperson Kunal Ghosh alleged that the Election Commission was moving at the behest of the BJP leadership.

"It is again proven that Election Commission of India is a part of the BJP and it is being driven by the ruling party in the Centre," Ghosh said.