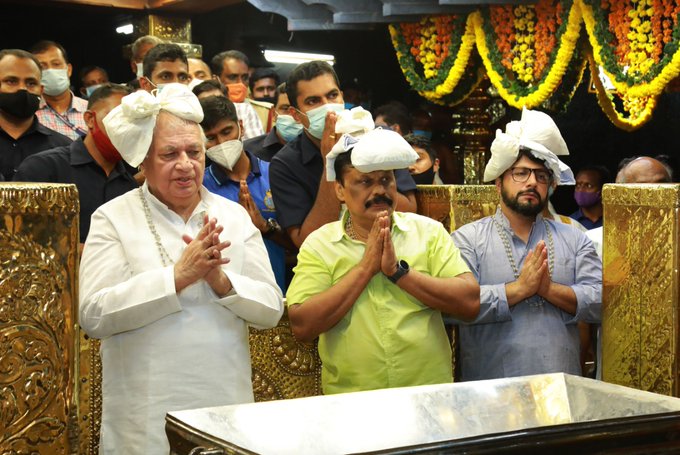 The Governor trekked up the six-kilometre dense forest path to reach the Sabarimala hill top on this evening.

The temple was opened on Saturday evening for the rituals of Malayalam month and eight-day Vishu festival.

Citing the rising number of COVID-19 cases in the country, Travancore Devaswom Board (TDB), the administrative body of temples in the state, has announced that the COVID restrictions will continue to be in effect in the temple.

Only 10,000 devotees will be allowed for darshan everyday through virtual queue passes. RT-PCR negative certificate is mandatory for darshan.

As part of Vishu festival, the idol of Lord Ayyappa will be decorated with flowers before the closure of the Sreekovil at 2100 hrs on April 13.

The Sreekovil will be opened for the annual Vishukani darsan on April 14. Thantri Kandararu Rajivaru and Melsanthi Jayaraj Potti will give coins to the devotees after Vishukani darsan.

Special rituals, Udayasthamana pooja, Kalabhabhishekam and Padi Pooja will be the special rituals to be performed at the temple during eight days of Vishu festival.

The temple will be closed on April 18 after Athazha Pooja and Harivarasanam at 2100 hrs.

Hon'ble Governor Shri Arif Mohammed Khan at Sabarimala, the abode of Lord Sree Ayyappa . The temple, situated 3000 feet above sea level, on Sabarimala hill in Pathanamthitta dist, Kerala, is one of the largest annual pilgrimage sites in the world: PRO,KeralaRajBhavan pic.twitter.com/cw8avgvuf6