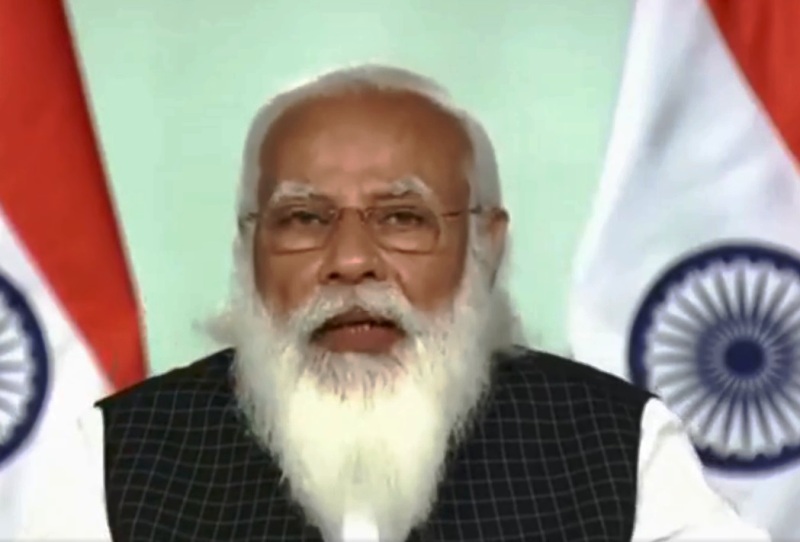 New Delhi/IBNS: Prime Minister Narendra Modi on Thursday asked state chief ministers to focus on creating micro-containment zones and extensive testing as means to contain the spread of Covid-19 second wave, which pushed up the daily surge of cases to 1.26 lakh in 24 hours.

Addressing the chief ministers in a virtual meeting amid the steep rise of Covid cases across the country, PM Modi said: "People have become very casual and even some state administrations have also relaxed."

Stressing on the need to increase RT-PCR tests, the prime minister said: "We can stop the rise of the peak with testing, tracking, treating, enforcing Covid appropriate behaviour and by focussing on Covid management."

He said in order to contain the virus, "we have to reduce human host in carrying the infection for which massive scale testing is very important."

"Don't worry about what people say regarding the number of cases, keep testing even if that means high positive cases as that is the only way of containing the virus. When there will be more positive cases, there will be treatment else the virus will keep spreading across the society," the PM told chief ministers.

Speaking at the meeting with Chief Ministers. https://t.co/oJ5bhIpdBE

He said, "There is need for increased RT-PCR testing and proper sampling of these for which some states have to enhance their infrastructure."

PM Modi also set a target of 70 per cent RT-PCR tests for the states, adding that "this is the only way to identify and fight the virus."

"Proactive testing is very important... Now more cases are asymptomatic. People feel that they have some mild pulmonary disease and then they infect the whole family," he said.

"Testing and tracing is the most important thing right now and we have to bring the positivity rate below 5 per cent," the PM added.

He said the state governments should not be casual or take it as less important in focussing on the containment of smaller zones.

"Our emphasis should be on micro-containment zones, we have to keep the maximum focus on it," he said.

He also encouraged the states facing a massive spread of the virus to promote night curfews.

"The world has also accepted the night curfew. Curfew makes people remember that they are living in the age of Corona. It is good that we promote Night Curfew as 'Corona Curfew'. This will not affect work too much," the Prime Minister said.

Assuring that the country now has much more resources and even vaccines to combat the virus, PM Modi also called upon the country to observe a "vaccine festival" between April 11 and 14 to inoculate the maximum number of eligible beneficiaries.

In a grim picture, India, which is witnessing a massive surge in Novel Coronavirus cases, on Thursday reported over 1.26 lakh fresh infections from across the vast country of 1.3 billion people.