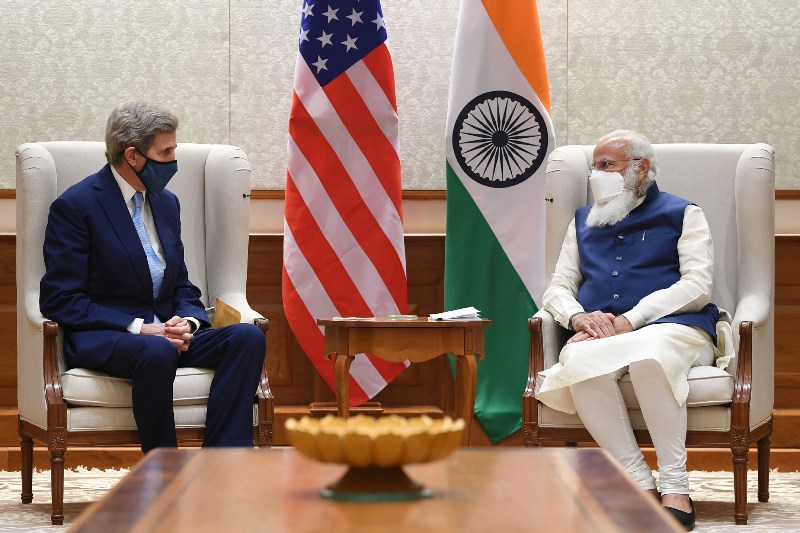 Kerry conveyed greetings of President Biden to the Prime Minister.

"The Prime Minister fondly recalled his recent interactions with President Biden including during the Quad Leaders’ Summit and requested Kerry to convey his best wishes to President Biden and Vice President Kamala Harris," read the government statement.

Kerry briefed the Prime Minister on his fruitful and productive discussions over the last two days in India.

He briefed the Prime Minister about the upcoming Leaders’ Summit on Climate scheduled for 22-23 April 2021.

The Prime Minister noted that India is committed to meeting its nationally determined contributions under the Paris Agreement and that it was among the few countries on track to meet these commitments.

The Indian side briefed Kerry about our wide-ranging efforts to meet commitments under the Paris Agreement and efforts to reduce emissions; and India's lead in multilateral initiatives such as the International Solar Alliance and Coalition of Disaster Resilient Infrastructure.

Kerry appreciated PM's vision and global leadership in climate action, especially our ambitious target of 450 GW of renewable energy by the year 2030. They discussed the need for supporting climate action by all countries in line with their respective national circumstances.

The Prime Minister agreed that cooperation between India and the United States particularly on financing innovation and faster deployment  of green technologies would have a positive demonstration effect on other countries.

Special Envoy Kerry’s visit is in the run-up to the Leaders’ Summit on Climate which will be held virtually and which will be convened by the US on 22nd -23rd April. At the invitation of President Biden, Prime Minister Modi will participate in this Summit along with other world leaders.
Prime Minister Modi and Special Envoy Kerry agreed to collaborate on a 2030 Agenda, with focus on clean and green energy through enhancing availability of climate finance, building resilient infrastructure, energy storage and green hydrogen.