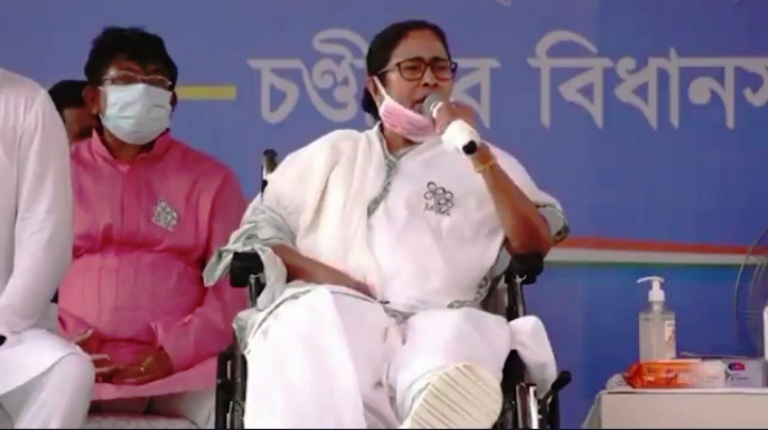 Kolkata/IBNS: Hours after West Bengal Chief Minister Mamata Banerjee during a rally had blamed Suvendu Adhikari and his father, Sisir Adhikari, over the 2007 Nandigram police firing that left 14 protesters dead, leaders of the Communist Party of India-Marxist (CPI-M), which was in the power that time, has started hitting out at the Trinamool Congress (TMC) recalling their year-old 'dirty political conspiracy' claim behind the massacre.

"We knew that the truth would reveal itself one day. Bengal is still compensating for misunderstanding you," Sujan Chakraborty wrote on his Facebook page addressing the then Chief Minister Buddhadeb Bhattacharya.

The CPI-M party on its verified Facebook page wrote that Mamata Banerjee's speech had proved that her TMC plotted a deep-rooted conspiracy and the then opposition party was behind the killings of 14 villagers in Nandigram in 2007.

Earlier on Sunday evening, during an election rally in Nandigram's Reyapara area, TMC supremo Mamata Banerjee indicated that the police force had entered Nandigram on the massacre day in 2007 after getting clearance from TMC-turned-BJP leader Suvendu Adhikari and his father Sisir Adhikari, who also recetnly picked up the saffron flag.

"Without the permission of the father and his son (read Sisir Adhikari and Suvendu Adhikari), police could never enter Nandigram that day. I can challenge that," Mamata Banerjee said without mentioning the names of her former commanders of the Nandigram movement.

"Try to remember, few men wearing police uniforms and slippers opened fire on unarmed farmers in Nandigram that day and they were not cops. This time too, during the elections, the same thing would happen— a large number of uniforms of BSF and CISF have been bought," Banerjee alleged.

These remarks of Mamata Banerjee sparked controversy following which the CPI-M has started attacking and mocking the TMC with its 'conspiracy' theory while the social media platforms have been flooded with the "Nandigram truth revealed" posts.

CPI-M's youth candidate in Nandigram, Minakshi Mukherjee, said, "We all knew who had conspired the Nandigram-plot and Mamata Banerjee yesterday just accepted that before the end of her regime."

Reacting to the issue, Sisir Adhikari said, "Surmising a clean-defeat in Nandigram, Mamata Banerjee has lost her mind and that's why she is making such baseless allegations."

When was asked about it, BJP candidate in Nandigram, Suvendu Adhikari, said that Mamata Banerjee, who was synonymous with appeasement politics, will get all answers in the result of the ongoing polls.

"I don't want to make any comment on someone who uses slangs against India's Prime Minister and she needs immediate mental treatment," Suvendu Adhikari said.

"People of Nandigram will give her all answers on Apr 1 and she will understand it on May 2, the day of the counting of votes," Adhikari added.

Election in the high-voltage seat, Nandigram, will be conducted on Apr 1 in the second phase.

Earlier on Mar 14 in 2007, a clash had erupted between police and protesting farmers in East Medinipur's Nandigram in an aftermath of a failed project by the then Communist Government of West Bengal to acquire land for a special economic zone (SEZ).

As the situation had turned violent, police restored to lathi-charge, lobbed tear gas shells and finally opened fire on the villagers.

At least 14 protesters were killed and several others were injured in the incident which had triggered large-scale political as well as social movements across Bengal and it was the beginning of the collapse of the decade-old Left regime in the state.

Later the Central Bureau of Investigation (CBI) had initiated a probe into the massacre and years later, the CBI exonerated the Buddhadeb Bhattacharya government of responsibility for the shootings.

It was also revealed later that all 14 people were not killed in the police shooting that day as bullet wounds were found in the bodies of only eight victims while injury marks caused by sharp or pointed weapons were spotted in five bodies and the remaining one had died due to injuries caused by crude bomb's splinter.

All images from video grab