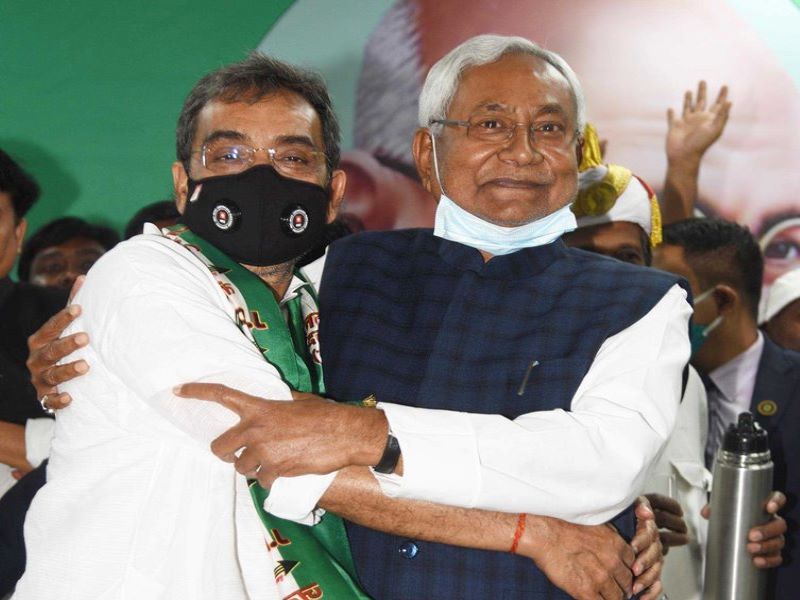 Mr Kushwaha announced the merger of his party with JD(U) in presence of Bihar Chief Minister and JD(U) former national president Nitish Kumar and other senior leaders of the party in a function organised at JD(U) office.

He told the media persons that he took the decision to merge RLSP with JD(U) after his party's approval in the two-day long national council meeting.

The RLSP leaders including Mr Kushwaha were given the membership of JD(U).

Conferring major responsibility on Mr Kushwaha, Chief Minister Nitish Kumar made him the parliamentary Board President of JD(U).

Addressing the media persons, Mr Kumar said he is against caste discrimination and prefers to work with everyone.

He hoped that Mr Kushwaha would attain political prosperity while being in JD(U).

In a sharp retort against the opposition, which has been attacking the government on the effectiveness of prohibition in Bihar, Mr Kumar said those pointing figures alleged that liquor was freely available everywhere but failed to provide information if asked.

Mr Kushwaha said that JD(U) was not a new party for him and the merger was just a formality.

He claimed that the voters in the last Bihar Assembly Elections indicated that RLSP should merge with JD(U).

Mr Kushwaha said he would not let outside forces to weaken Mr Kumar and work according to the directions of the chief minister.

He said that RLSP merged with JD(U) without any precondition.

The former minister maintained that he has taken a pledge to serve Bihar and would try to discharge the responsibilities conferred upon him by the Chief Minister.