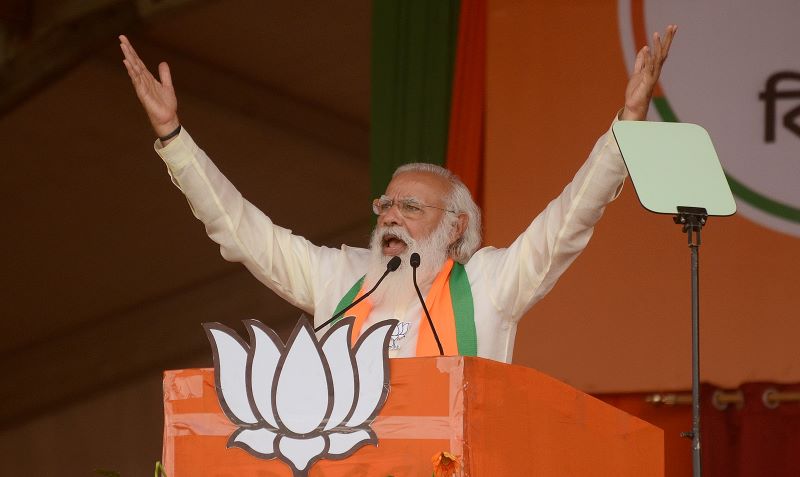 Kolkata/IBNS: Prime Minister Narendra Modi Sunday set the tone of his Hindu nationalist Bharatiya Janata Party (BJP)'s campaign for the upcoming West Bengal assembly elections where the saffron brigade is aiming to taste victory for the first time ever.

The stage was set Sunday at the Brigade rally where Modi lashed out at the ruling Trinamool Congress, its chief Mamata Banerjee besides other marginalised opposition parties for close to 1.5 hours addressing the jam packed ground. 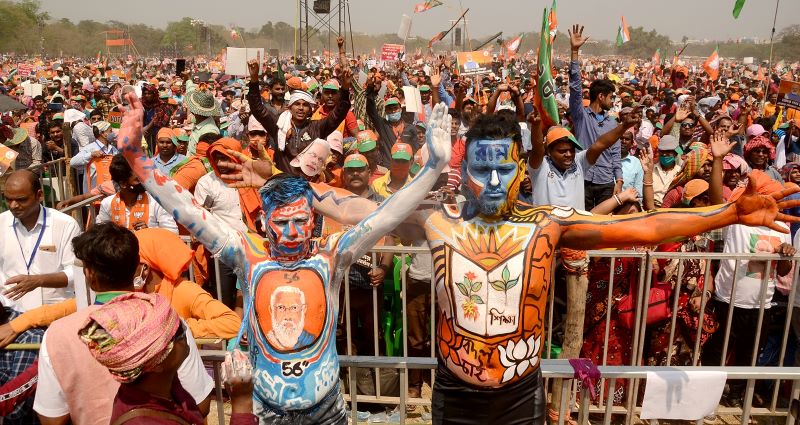 BJP supporters in the frame

"In this election, on one side there are TMC, Left and Congress while people are standing on the other side," Modi said at the same ground, where the Left-Congress-Indian Secular Front (ISF) held a massive rally against the Trinamool and BJP last Sunday.

Like every other time, Modi targeted the Trinamool regime over corruption stating, "These people (Trinamool Congress) have done so much corruption like extortion, syndicate, commission cut that they can themselves organise Corruption Olympics." 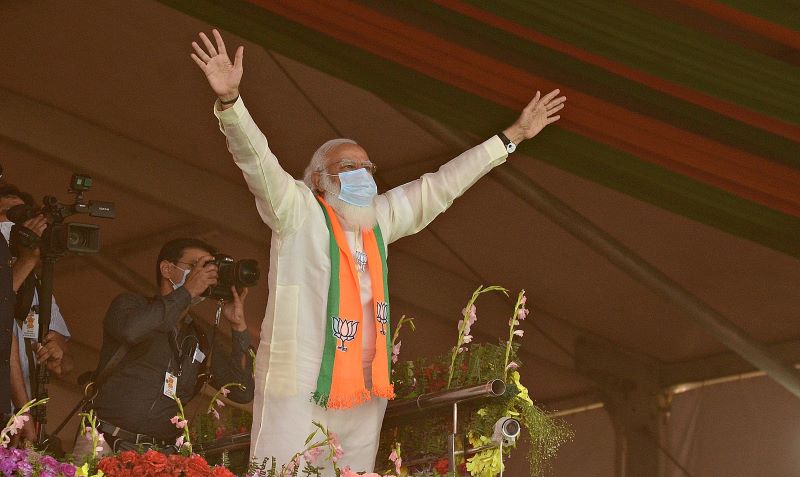 Joining the very popular and trendy slogan raised by the Trinamool, Khela Hobe, Modi said, "Didi and her men are having sleepless nights so they are saying Khela Hobe."

"It's true that these people are seasoned in playing. What more they would play after all these years," the Prime Minister said at the rally which saw massive turnout amid the intense heat in the eastern city of India.

Sharpening the BJP's attack on Mamata Banerjee over nepotism, Modi drew a parallel line between the Chief Minister and the tradition of her former party Congress. 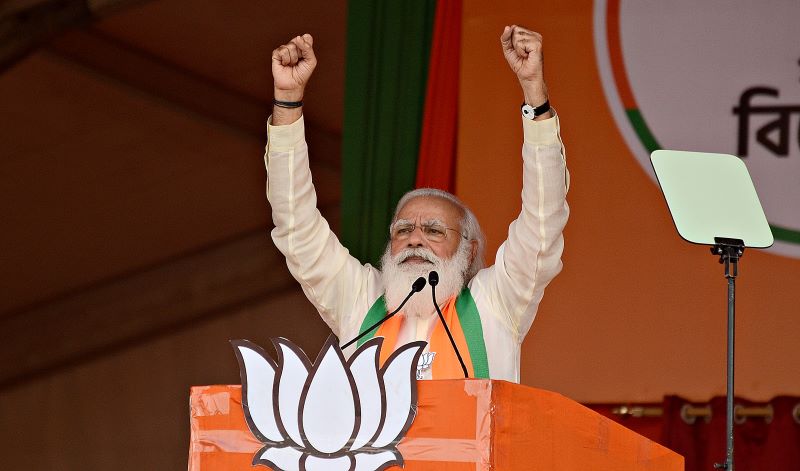 PM Modi at the rally

"Bengal had elected you (Mamata Banerjee) to play the role of a Didi of all. But why did you choose to play the role of an aunt of your nephew," the BJP's main campaigner said in strong words, referring to the Trinamool supremo's parliamentarian nephew Abhishek Banerjee.

"I have known Didi (Mamata Banerjee) for a long time. She was different while she was fighting against the Left. But now Didi isn't the same because her remote control is in someone else's hand," Modi said, referring to Abhishek's rise in the Trinamool.

While he had warned people of the Left-Congress alliance during an earlier rally in the state, Modi Sunday directly attacked the Left accusing the two parties of double standards. 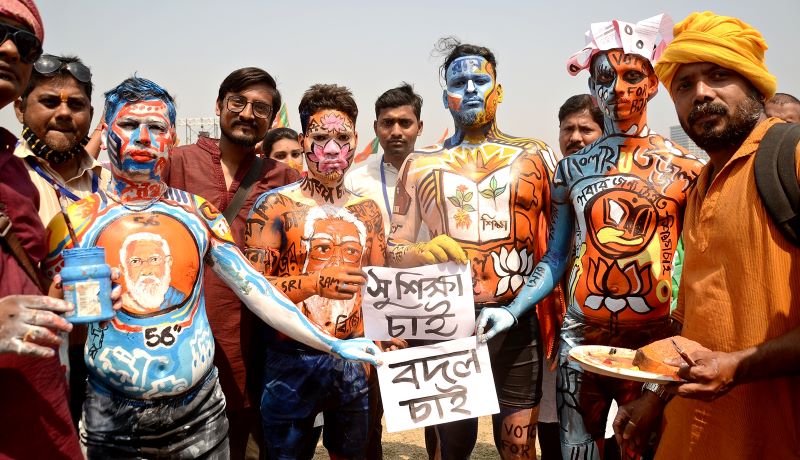 BJP supporters and Modi admirers at the rally

Modi said, "Once the Leftists had raised slogans to destroy the corrupt hands of the Congress. The Left had ruled the state for decades based on this slogan. How did the same hands of Congress turn white which the Left once used to call black? How could the Left seek blessings from the same hands which they wanted to break earlier?"

Reiterating the BJP's aim to bring "Sonar Bangla (Golden Bengal)", Modi said he wanted to make development in the next five years and bring "asol poriborton (real change)" dubbing the political change brought by Banerjee in 2011 ousting the Left as a superficial one.

West Bengal Chief Minister Mamata Banerjee took the attack head on from a rally in Siliguri asking the Prime Minister why he was silent on the hike in prices of fuels. 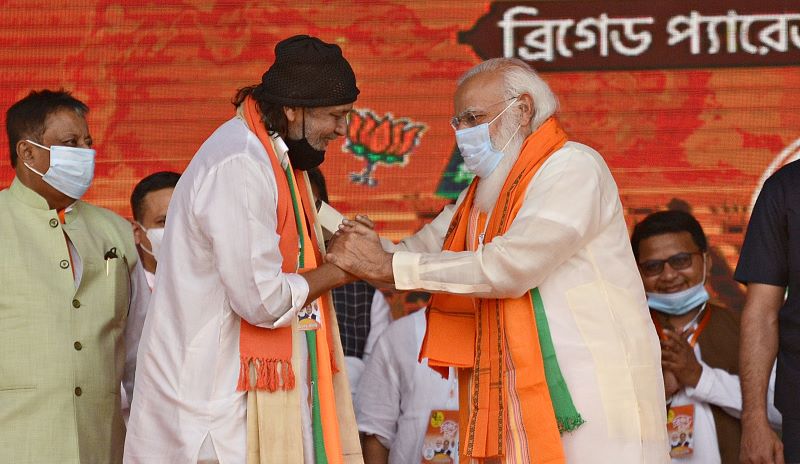 (From L to R) Mithun Chakraborty and Narendra Modi

"The Prime Minister used to come after a regular interval. We have no problem as he can come here for campaigns. But he should first answer why the fuel prices are rising and why the costs of LPG cylinders are soaring," Banerjee said at a rally protesting against the price rise of fuels.

If Modi's dynamic speech was the main plot in the brigade rally, Bollywood superstar Mithun Chakraborty's joining in the BJP was the sub plot fuelling more speculations whether the Bengali icon, known as "Dada", would become the saffron camp's Chief Ministerial face. 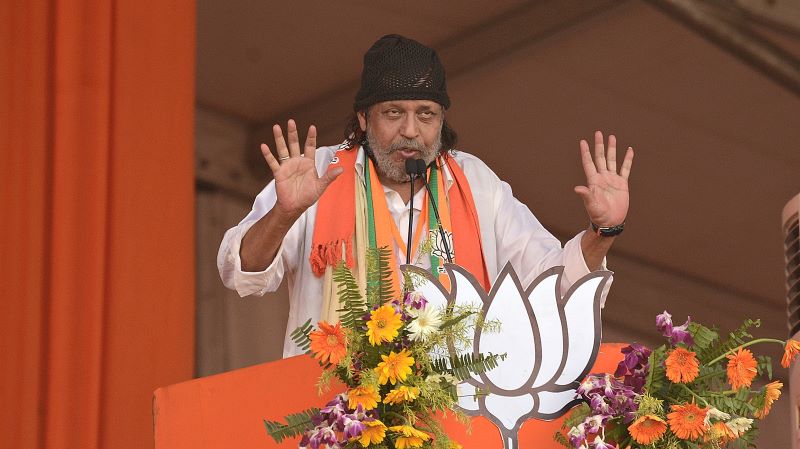 Chakraborty, who was once close to the Left and later became the Trinamool MP in Rajya Sabha, Sunday refrained from attacking Banerjee but said he had always wanted to work for people.