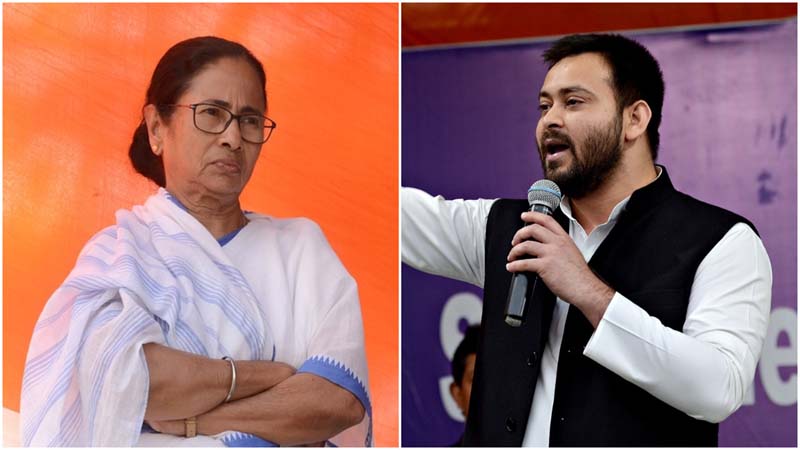 RJD will give full support to Mamata Banerjee in Bengal polls: Tejashwi Yadav

“There is a huge Bihari population in West Bengal. The RJD will give full support to Mamata Banerjee in the upcoming polls and I appeal to all Bihari people to vote in favour of Mamata Banerjee,” Yadav said standing beside Banerjee, who heads the ruling Trinamool Congress.

“The BJP has done nothing in Bihar. Now they have deputed all their ministers to West Bengal instead of allowing them to work,” he added.

Banerjee said, “Both of us are fighting together.”

She added, “Tejashwi would have formed government in Bihar unless the BJP had done trick."

“But today or tomorrow, Tejashwi form government in Bihar and the BJP won’t be able to come to power in West Bengal.”

While the RJD gave support to the Trinamool in West Bengal, Tejashwi had fought the very recent Bihar polls in an alliance with Banerjee’s adversaries Left and Congress.

On his disparate political moves, Yadav said, “It varies from state to state. LDF and UDF are also fighting in Kerala (Left and Congress have formed an alliance in West Bengal).”

To take on the Trinamool and an aggressive Bharatiya Janata Party (BJP), a Union Front has been created by the Left parties, Congress and Furfura Sharif cleric Abbas Siddiqui's Indian Secular Front (ISF).

The BJP, which won 18 seats in the 201 9 Lok Sabha polls, has emerged as the prime challenger to the Trinamool, which is seeking its third uninterrupted term.