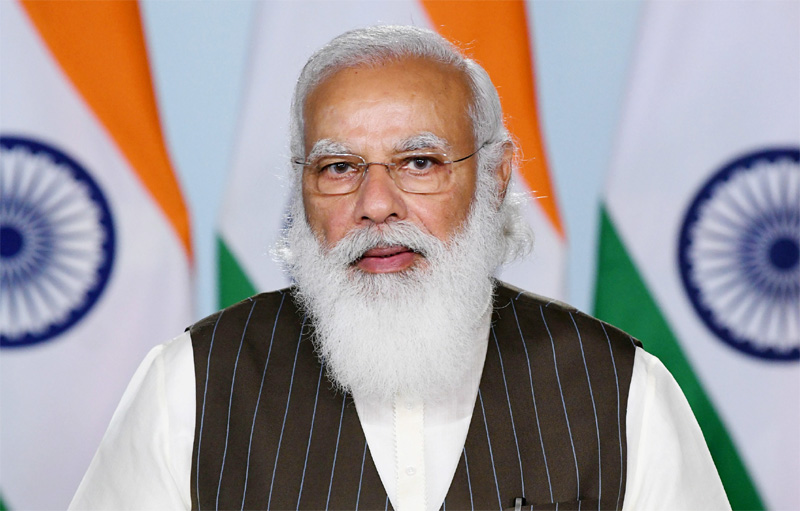 Srinagar/UNI: Prime Minister Narendra Modi on Friday inaugurated the second edition of Khelo India winter games in world famous ski resort of Gulmarg through video conferencing, saying that it is a step towards making Jammu and Kashmir a winter sports hub and developing a new sporting ecosystem in the Union Territory.

PM Modi said that these Winter Games happening in Gulmarg, show how J&K is ready to reach and embrace new heights of peace and development. “These games will help develop a new sporting ecosystem in the union territory,” the Prime Minister said while addressing about 1200 participants and officials at Gulmarg through video-conference from Delhi.

Jammu and Kashmir Lt Governor Manoj Sinha and Union Minister Kiren Rajiju besides advisors were also present on the occasion. The e-inauguration by the Prime Minister was followed by march-past by the participating teams from 27 states and UTs.

Around 1200 players and guests are participating in the five-day winter games at Gulmarg, which received fresh snowfall Friday morning.

Modi said that the event is a step towards making India’s presence felt in the international winter games arena and also make Jammu and Kashmir a hub of winter sports. “These Games will also strengthen the resolve for ‘Ek Bharat, Shreshth Bharat’,” he added.

He said two Khelo India centre of excellence will be setup in Srinagar and Jammu while Khelo India centres will be established in all 20 districts of the Union territory, which will provide facilities to budding sports persons.

Mr Modi said earlier sports were considered to be just extracurricular activity, now sports will be part of the curriculum, adding grading of sports will also count in children's education.
Official sources said that due to non-availability of accommodation at Gulmarg, which has witnessed huge influx of tourists this winter season, many teams have been provided accommodation at Tangmarg and other adjoining areas.

Earlier this month, the district administration Baramulla had issued an order asking hotels to cancel pre-bookings of tourist and accommodate participants and officials of Khelo India Winter games. But, the order was retrieved following massive outrage from all sections of society, including hoteliers.

The prominent sports activities, which will be the hallmark of the winter games, include snow shoe race, ice skating, ice hockey, skiing, Nordic ski, snowboarding and ski mountaineering etc.

Athletes from the Indian Army and the Jawahar Institute of Mountaineering and Winter Sports will also participate in the event, besides the athletes from different states and UTs.
On the occasion, a number of cultural programmes shall also be organised, besides setting up of stalls of ethnic food and local crafts.

The event is being organised by the Union Ministry of Youth Affairs and Sports in collaboration with the J&K Sports Council and the Winter Games Association of J&K. The J&K administration has made all arrangements and put in place all facilities in advance. A special team of doctors and ambulances have been directed to be kept available round the clock.

A special team of the State Disaster Response Fund shall remain deployed for relief and rescue operations.