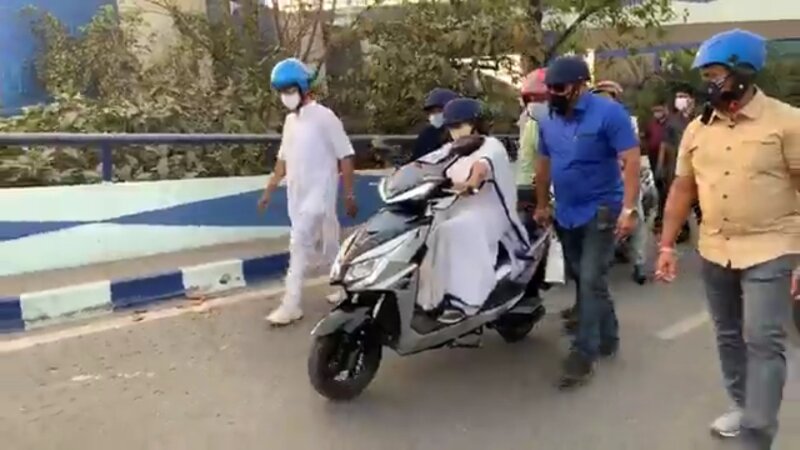 Kolkata/IBNS: Surprising all, West Bengal Chief Minister Mamata Banerjee on Thursday drove an electric scooty back home from her office Nabanna in a symbolic protest against the fuel price hike.

Banerjee went to the state secretariat from her home in south Kolkata in the scooty which was driven by her colleague in the government, Firhad Hakim.

However while coming back home, the Chief Minister took the charge of driving the scooty for a large part of the distance.

Arriving at her home in Kalighat, Banerjee said, "The prices of LPG gas was Rs. 400 before Narendra Modi came to power. But now the price has doubled. Either Narendra Modi will have to bring back the price to Rs. 400 or quit."

After reaching Nabanna in the morning, Banerjee told the media, "Narendra Modi is fooling and looting people. There is a hike in petrol, diesel prices. Kerosene is not available adequately. The prices of fuel have skyrocketed.

Attacking the Prime Minister for renaming the Motera Stadium as Narendra Modi Stadium, the Chief Minister said, "They are changing all names. Don’t know when they would change the names of roads and this country."

In several cities, the fuel prices have hiked to above Rs. 100 causing trouble to the common people.