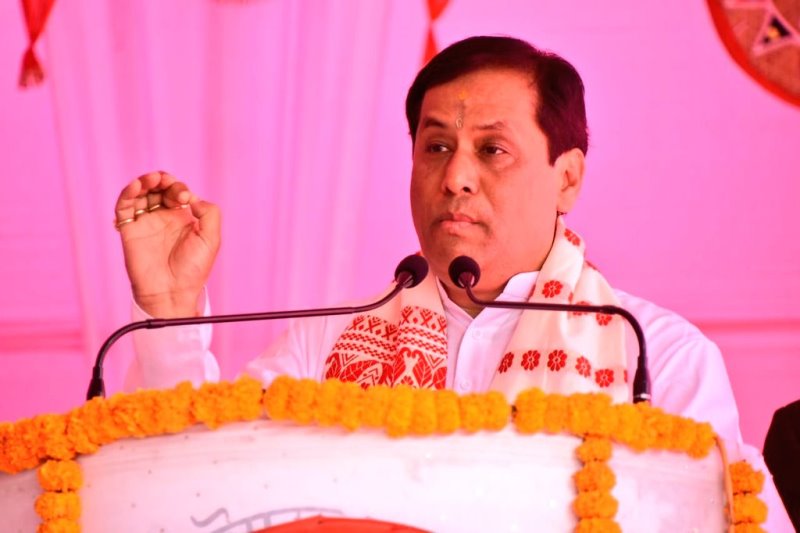 The foundation stones were laid during a Mahila Samaroh organized by Assam State Rural Livelihood Mission in association with Sonitpur district administration and Sonitpur Zila Parishad at Jamugurihat. It may be noted that the Industrial Park will be built at a sprawling 315 bigha of land and the permanent campus of ITI, Sootea will be built with financial outlay of Rs. 25 crore.

Chief Minister Sonowal also presented 153 Scooty to women beneficiaries under Jivika Sakhi Express Scheme and presented financial assistance to the tune of Rs 50,000 to each of the Self Help Groups (SHG) from Sonitpur district.

Chief Minister Sonowal terming the women as the source of supreme energy said that the BJP led state government in the state through its commitment to the empowerment of women has been taking a series of steps to make women an important stakeholder in the process for economic development of the state.

He said that during last several months the women Self Help Groups by selling the products produced by them across the country and outside earned several hundred crore rupees.

Sonowal while hailing this effort of the women SHGs said that this has helped the state to expedite its economic growth.

The Assam Chief Minister also said that true to the spirit of Prime Minister Narendra Modi’s call for Aatmanirbhar Bharat this achievement of the women SHGs would definitely help the state towards achieving Atmanirbhar Assam.

Sonowal also said that to strengthen the edifice of self-reliant Assam the people will have to work diligently with self-confidence.

He said that the BJP led state government immediately after coming to power took several steps for qualitative and quantitative development of the state. As a result of this for the last four and a half years the state witnessed unprecedented growth stories with no incidence of any violence from any part of the state, he said.

Citing a stark contrast between the erstwhile Congress government and the present BJP led state government, Chief Minister Sonowal said that because of the good governance, peace and tranquillity and harmonious coexistence of the state were founded on a strong pedestal.

Highlighting the development initiatives undertaken by the state government specially for the north bank of the Brahmaputra, Sonowal said that the Jonai campus of Tezpur University, Indian Agriculture Research Institute at Gogamukh, Engineering College at Dhemaji, Medical College at Lakhimpur, Sri Sri Madhab Dev University at Narayanpur, Nursing Training College at Gahpur, Engineering College at Bihali, Medical Colleges at Biswanath, Nalbari, Dhubri and Kokrajhar were some of the institutions established by the state government to develop the human resources of the state.

He also said that during the present state government dwelling houses under Pradhan Mantri Awas Yojana were built to enable the poor and underprivileged of the society to live with dignity.