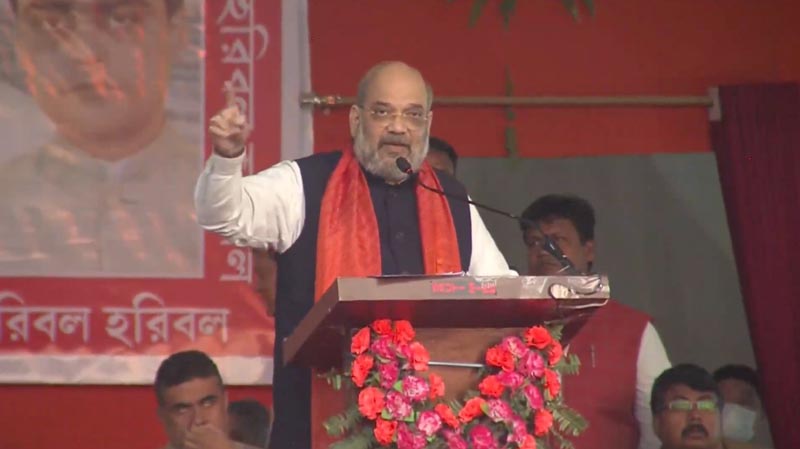 CAA will be implemented after Covid-19 vaccination process gets over: Amit Shah

Kolkata/IBNS: Despite massive opposition from the Trinamool Congress, Left and Congress in West Bengal, Union Home Minister Amit Shah on Thursday reiterated his commitment of implementing the contentious Citizenship (Amendment) Act but only after the Covid-19 vaccination process ends.

At a rally in Thakurnagar, which constitutes the crucial Matua community, Shah said, "I once again tell all people that the CAA will be implemented across the country after the Covid-19 vaccination process ends."

"Mamata Didi (Mamata Banerjee) is opposing the CAA but how can she oppose it when the law was made in Parliament? Moreover, she (Mamata Banerjee) won't be able to create obstacles to the CAA implementation as she won't remain the Chief Minister after April," the tall Bharatiya Janata Party (BJP) leader added.

The CAA, which aims to grant citizenship to Hindu, Sikh, Christian, Buddhist, Jain, Parsi but not Muslim refugees who came to India from neighbouring countries Pakistan, Bangladesh, Afghanistan before 2015, was a flashpoint between the country's ruling BJP and most of the opposition parties in late 2019 and early 2020.

"No Muslims will have to fear over CAA. This law is not snatching any one's citizenship but granting," the Home Minister said.

The law, the implementation of which is likely to take place after the state elections, was enacted in Jan 2020.

Addressing the Matua community in Bogaon on Dec 9, 2020, West Bengal Chief Minister Mamata Banerjee said the Matua community, a sect of folk Hinduism which is key in the state's contemporary politics, needs no certificate to prove their citizenship, in an attack on the BJP.

"We have already accepted the Matua people as our citizens. The Matua community needs no certificate. They are insulted in the name of CAA," said Banerjee, who heads the ruling Trinamool Congress.

"Me as the CM saying they need no certificate," she asserted.