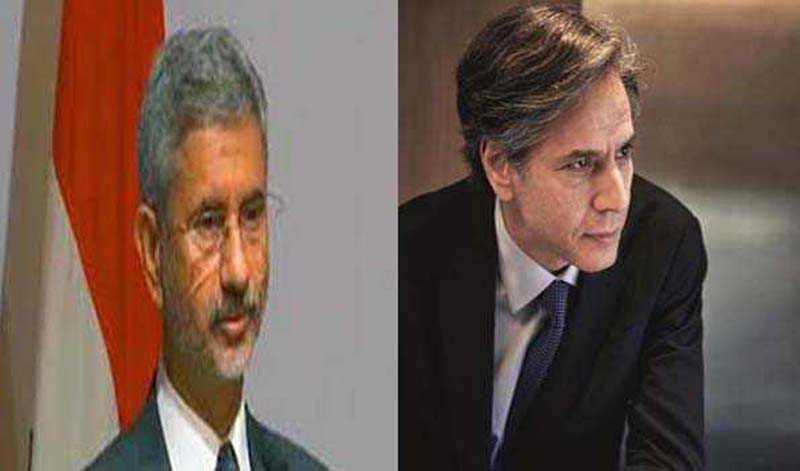 Washington/UNI: A day after Prime Minister Narendra Modi spoke to US President Joe Biden, their first conversation after his inauguration, External Affairs Minister S Jaishankar and US Secretary of State Antony Blinken on Tuesday held discussion on the Indo-Pacific developments, coup in Myanmar and the Quad cooperation.

During the telephonic conversation, Jaishankar and Blinken talked to reaffirm the strength of the US-India partnership and also discussed issues of mutual concern, including the situation in Burma (Myanmar), the US State Department Spokesperson Ned Price said.

Secretary Blinken expressed concern over the military coup and the importance of rule of law and the democratic process in Burma, Mr Price further added.

The Secretary and the Minister also discussed regional developments, including the value of US-India cooperation across the Indo-Pacific. Both sides look forward to expanded regional cooperation, including through the Quad, and to address the challenges of COVID and climate change.

Earlier in the day, Jaishankar took to twitter to inform that he held discussion with Secretary Blinken on Myanmar, Indo-Pacific and the Quad.

"Welcomed the comprehensive discussion today with @SecBlinken. Reviewed Indo-Pacific developments and the Quad cooperation. Exchanged views on the situation in Myanmar. Look forward to remaining in touch," the Minister tweeted.

Welcomed the comprehensive discussion today with @SecBlinken. Reviewed Indo-Pacific developments and the Quad cooperation. Exchanged views on the situation in Myanmar. Look forward to remaining in touch.

Both India and US have been expanding cooperation bilaterally as well as under the framework of the Quad to promote a free and open Indo-Pacific region. The Quad is group of India, Australia, Japan and the US.

These issues also figured in the PM Modi and President Biden's telephonic conversation.