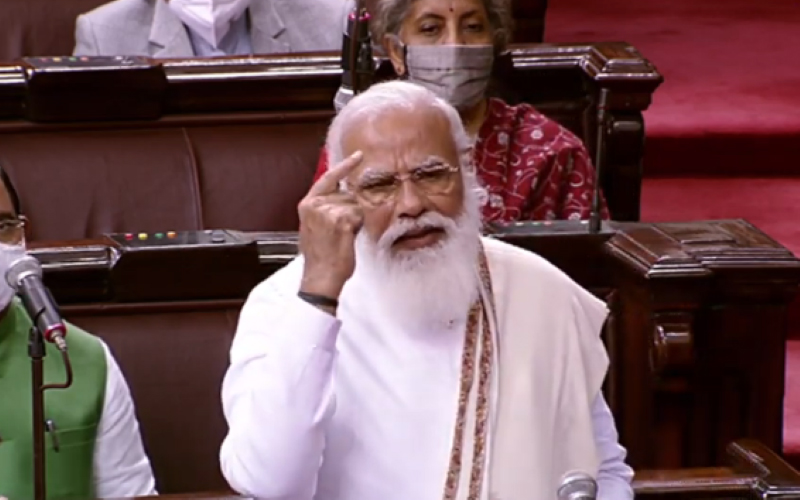 New Delhi/IBNS: Amid the deadlock over the farmers' protests against the agricultural reforms, Prime Minister Narendra Modi on Monday said the Minimum Support Price (MSP) will continue to exist, besides appealing to the protesters to end the agitation going on for over 70 days.

"MSP was there. MSP is there. MSP will remain in the future. Affordable ration for the poor will continue. Mandis will be modernised," Modi said during the Motion of Thanks to the President's address in Rajya Sabha.

"Agitation is the right of people but I appeal to them to end the protest, send back elderly people to home and discuss with the government to bring a solution to the stalemate."

The farmers, mostly from Punjab and Haryana, are camped at the Delhi borders since Nov 26, 2020, protesting against the agricultural reforms which they fear would leave them at the mercy of big corporate houses.

More than 10 rounds of talks have occurred between the representatives of the government and protesters but no resolution to the deadlock has yet been achieved as the farmers are stubborn over their demands of the repeal of the farm laws and a legal guarantee of MSP to their produce.

The Centre has beefed up security at Delhi borders after the farmers' tractor rally turned violent on Jan 26 in the national capital claiming the life of at least one farmer and injury to more than 100 police personnel.

Union Agriculture Minister Narendra Singh Tomar on Friday said the protests against the new farm laws are limited to one state, at a time the Narendra Modi government is facing its stiffest challenge over reforms in the last six-seven years.

In the backdrop of the support to the farmers' protest by international celebrities as well as teen climate activist Greta Thunberg, Modi on Monday said, "A new entity has come up in the country- 'Andolan Jivi'. They can be spotted wherever there is a protest, be it agitation by lawyers, students, or labourers, explicitly or implicitly. They cannot live without 'andolan', we have to identify them and protect the nation from them."

On Covid-19 and its challenges, Modi said, "The Covid-19 period has added new strength to our federal structure and the spirit of cooperative federalism."

He said, "India has seen days when there was a large threat of polio, smallpox. Nobody knows whether India will get a vaccine or how many people will get it. From those days, we are now here- when our nation is making vaccines for the world. This increases our self-confidence."

"The eyes of the world are on India. There are expectations from India and there is confidence that India will contribute to the betterment of our planet," the Prime Minister added.

On the economic front, Modi said, "While the entire world is reeling under economic downfall due to Covid-19, India is the only country whose GDP is projected at double digits."