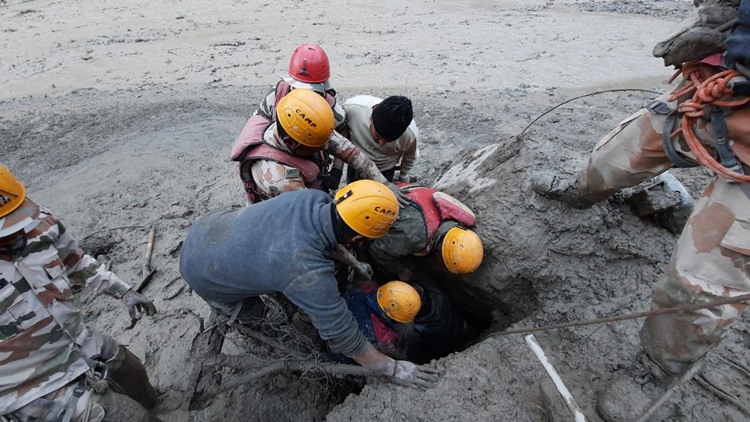 New Delhi/UNI: The Centre has pressed Defence forces into rescue work in Joshimath area of Uttarakhand where a massive flood occurred Sunday morning.

Indian Air Force’s transport aircraft C-130 and AN-31 on Sunday airlifted two teams of National Disaster Response Force (NDRF) to flood-hit areas in Uttarakhand, where a glacier broke off at Joshimath and caused massive flooding in the Dhauli Ganga river.

The army has deployed its four columns (400 personnel), two medical teams, one engineering task force at Ringi village in Uttarakhand to carry out search and rescue operations.

Besides these, the army also deployed its choppers for aerial recce and to assist the state government and NDRF to tackle the flood situation.

Meanwhile, the ITBP has rushed a team of 250 personnel from Auli to carry out rescue operations on the site. "With engineering equipment, the personnel are digging to open Tapovan tunnel, which is completely blocked due to debris. Nearly, 17 labourers are stuck in the tunnel", the Force officials said, adding that it was the Himalayan border guarding force who responded first to this natural calamity in the morning.

At around 10:45 am on Sunday, flash flood occurred in river Rishi Ganga after glacier fell in the river, which exponentially increased the volume of water.

With this, the ongoing Rishi Ganga hydro project near Raini village and the BRO bridge on Joshimath-Malari highway were also completely washed away.

An NTPC project on river Dhauli Ganga near Tapovan and two Jhulla bridges connecting villages on the other side of river were also completed destroyed.

Meanwhile, Union Home Minister Amit Shah who was on a day long tour of Maharashtra, spoke to Uttarakhand Chief Minister Trivendra Singh Rawat over the Chamoli flood situation and assured him of all helps.