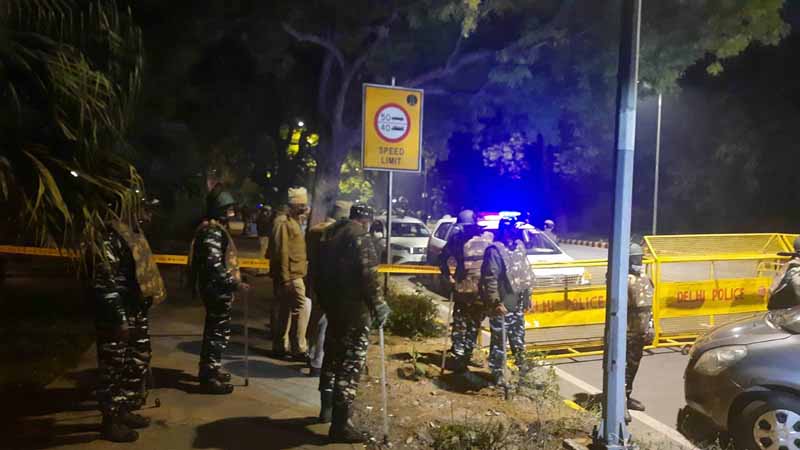 New Delhi: A terror outfit named ‘Jaish-Ul-Hind’ has claimed responsibility for the blast which occurred outside the Israel Embassy in New Delhi on Friday.

A screenshot claiming to be from messaging service Telegram has gone viral on social media in which ‘Jaish-Ul-Hind’ claims behind the blast. The special cell of Delhi Police is currently probing the claim made on Telegram and is yet to confirm the existence of ‘Jaish-Ul-Hind' as well as its suspected role in the attack, reports India Today.

Sources in investigating agencies have told the Indian news channel that they won’t rely on this particular claim till the time they gather any evidence of ‘Jaish-Ul-Hind’ being responsible for the blast. They also suspect it might be an attempt to mislead the investigation.

With the initial probe indicating to Iranian link in the blast near Israeli Embassy on Friday evening, the anti- terror probe agency NIA is likely to take over this case from Delhi Police, a source in the security set up told UNI news agency here on Saturday.

Besides the international ramification, it was also learnt that an Israeli probing team may join the investigation of this case, the Government is all set to hand over this case to the National Investigation Agency (NIA), the source further said.

A team of NIA officials had already visited the blast site on Friday evening and had collected evidence materials. The officials also carried out complete mapping of the area to identify the route and the persons involved in the blast.

The initial investigation in this case suggests that explosives and other materials used in the low-intensity IED blast were locally sourced, a Delhi Police official on condition of anonymity said.

He also said that the Delhi Police probe team has been in touch with the central agencies, including IB and immigration authorities and trying to get the details and their locations of Iranian nationals who have come to India in the past one month.

Police sources have also confirmed that the envelope that was found at the blast site on Friday evening has revealed the Iranian connection to the blast and it was claimed that “It was a trailer and their target was Israeli installations in India”.

Sources also confirm that security has been beefed up at all places across the country having Israeli links.

The probing team of Delhi Police’s Special Cell’ had earlier in the day visited the site near the embassy to collect more evidence as part of its ongoing probe, sources said, adding that it managed to get access to footage from some of the CCTV cameras in the area.

“We have recovered some CCTV footage but have not obtained anything concrete yet as most of the CCTV cameras in the area near the embassy were non-functional,” an official in the city police network said.

Earlier, footage retrieved from CCTV cameras showed a vehicle moving suspiciously near the embassy just before the explosion, sources added.

The cab driver has been identified and a team had interrogated him to take the description of the two passengers who were alighted near the blast site a few minutes before the explosive took off, another source in the Delhi Police said, adding that on the description narrated by the driver, a sketch is being drawn to identify those passengers.

He also said that forensic experts who have also collected some samples from the crime scene on the Friday evening will ascertain the chemical composition used in the low-intensity improvised explosive device (IED).

The bomb disposal squad of National Security Guards (NSG) on Saturday also inspected the blast site to ascertain the composition of the material used in the explosion and will also try to match with ‘Blast Signature’ with the data of the terror outfits locate the ultras behind this incident.

Official sources have also said that the team which collected primary evidences yesterday, have confirmed that ball bearings were also used as splinters that were found scattered on the ground near the site.

Around 1710 hrs on Friday, a minor explosion occurred at the APJ Abul Kalam Road in Delhi near the Israeli Embassy which damaged the windscreen and window glasses of three – four vehicles parked at the blast site whereas no injury was reported in this case.