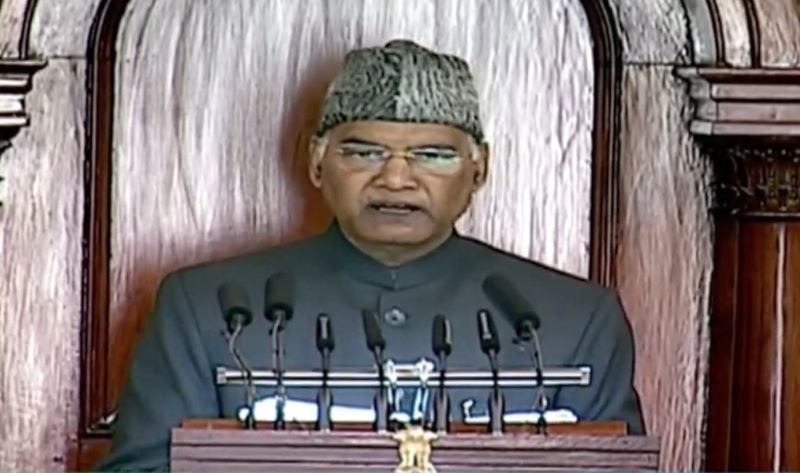 New Delhi/IBNS: In his address to Parliament on the first day of Budget session, President Ram Nath Kovind on Friday said the Narendra Modi government will be honouring the Supreme Court order pausing the contentious farm laws.

In the customary joint session of Parliament, Kovind called the violence in protesting farmers' tractor rally as "unfortunate".

"Farmers recently carried out a tractor rally. However, there was violence during the protests and there were incidents of insult to the national flag at Red Fort on Republic Day. This was very unfortunate," the President said.

Eighteen opposition parties including the Congress had boycotted President Ram Nath Kovind's speech in protest against the Centre's contentious farm laws that have triggered widespread protests in and around Delhi.

The Narendra Modi government is facing the stiffest protest in its more than six-year rule as thousands of farmers camped in and around the national capital Delhi for more than 60 days, with a one point agenda of the repeal of the farm laws.

However, the farmers' protest has lost its steam post violence which occurred during the tractor rally on India's Republic Day on Jan 26, leading to the death of at least one farmer and injury of more than 100 police personnel.

Post violence, two farmers' unions have called off their protest against the agricultural reforms.

Speaking on the session, Prime Minister Narendra Modi told reporters earlier in the day, "In 2020, the Finance Minister has already brought four-five mini budgets in the form of different packages. The upcoming budget will be in continuation of the mini budgets already announced to further strengthen our resolve to build an Atma Nirbhar Bharat."