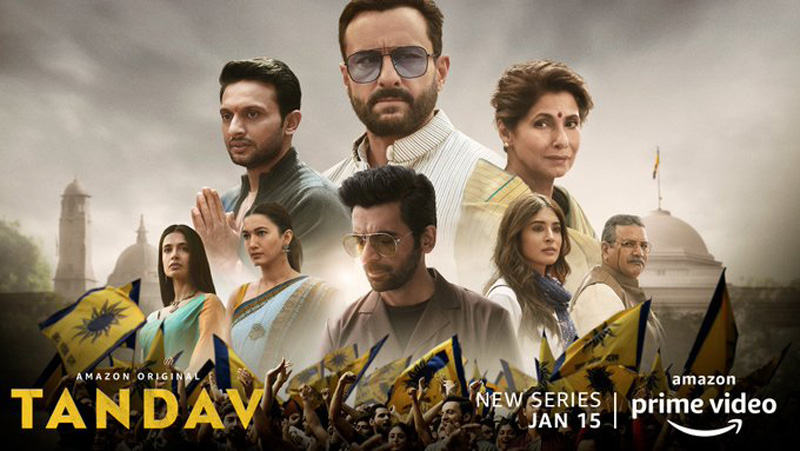 New Delhi/IBNS: The Supreme Court on Wednesday refused to provide protection against arrest to the team of Amazon Prime's original web series 'Tandav' after at least three FIRs were filed in Uttar Pradesh over the content which allegedly "insults the Hindu gods and goddesses."

Similar cases have been lodged in other states including Madhya Pradesh, Maharashtra, Karnataka, Bihar, Delhi and Chandigarh.

The makers of the web series have been accused of "hurting religious sentiments", "promoting religious enmity" and "defiling a place of worship".

The cases, which started after criticism on social media, continued even after the makers issued an apology and later made changes to the two scenes deemed controversial  "to address concerns".

Subsequently, actor Zeeshan Ayyub, Amazon Creative Head Aparna Purohit and the maker of the series Himanshu Kishan Mehra had moved the apex court asking for a freeze on the possible arrest.

In their petition, the actors and makers also said facing prosecution in various states involved harassment and wanted the intervention of the top court to transfer the FIRs to Mumbai.

The top court has agreed to consider the second request of the petitioners, who were being represented by senior Lawyers Fali Nariman, Mukul Rohatgi and Sidharth Luthra.

Ayub's lawyer argued that his client was just an actor working under a contract, and the views expressed were that of the character in the series.

"You accepted the contract after reading the script. You cannot hurt religious sentiments," Justice Shah said.

The apex court, however, refused to allow interim protection and asked the petitioners to approach the High Courts.

The case, filed on a complaint by BJP legislator Ramchandra Kadam, named the cast and crew of Tandav, including director Ali Abbas Zafar and actors Saif Ali Khan and Mohammed Zeeshan Ayyub.

The BJP leader also demanded that these online streaming platforms be brought under regulation.